Angler of the Year Championship

Normally I don’t pre-practice for Elite Series events, but in this case I made an exception because I figured there’d be a chance I’d be in the running for the Angler of the Year title and I wanted to give myself every chance to be competitive. Therefore, I went down and rode around for a half day before it went off limits. It’s not a very big lake, and I knew that it had blueback herring and both big spots and largemouths, so it didn’t take a lot of time to understand the lay of the land. I expected that it would be a lot like Hartwell or Clarks Hill, but up in the mountains.

As it turned out, I won the Open on Douglas in the days immediately preceding this tournament, so I didn’t even get there until Monday afternoon. That left plenty of time to see the place during the remainder of the official practice period.

I had no intention of fishing offshore if I didn’t have to do so, and after looking at Google Earth I understood that there were several major creeks feeding into the lake and that’s where I intended to fish. Nevertheless, in order to keep them honest I spent a few hours out deep on the first full day and while I caught a few the bites were extremely random. I couldn’t dial in the bite and knowing that the herring and the spots move around constantly I was happy to look elsewhere.

I headed to the bank and almost immediately started seeing “wolfpacks” of six, eight, 10 or even 15 bass swimming around and there were some good ones among them. You’d have to stand on the trolling motor to be effective, but I knew that with some persistence it would be possible to put together a few good bags.

Later in the day I went up the largest creek arm and once again had a few bites while managing to see quite a few more fish. I knew that it wouldn’t be easy, but I also knew that the right bites were there.

On the final day of practice I went up the other big creek arm and once again saw a good many fish. I was committed to the shallow bite in current even though I expected that I’d have to work for every bite.

They sent us out on the first day of competition in the order of the AOY standings, so I was boat number four, and I headed all the way to the back of the larger creek. Dropshotting a Bass Pro Shops Tri-Color Worm I quickly sight-fished four keepers into the boat. I suppose a wacky worm might’ve worked also, but I figured that they might’ve seen that before, so the dropshot was my tool of choice. I wasted a bunch more time in there trying to get some bigger bites but they evaded me consistently. While I knew that it wouldn’t be easy, I didn’t expect to struggle so much.

I moved out and finally finished out my limit with a buzz toad, but then things got tough again. I lost a fish that would’ve culled on my dropshot and missed several others. After going five for five to start the day, the next streak was zero for five. One was a solid 3-pounder that annihilated my buzz toad but somehow managed to avoid getting hooked. The wolfpacks had scattered and shrunk and I only managed to cull once more at the end of the day.

My 8-01 had me mired pretty far down in the standings. On the one hand, it wasn’t that big of a deal because I couldn’t fall out of the Classic. On the other hand, with each spot I moved down in the AOY standings I’d lose some serious money. I got some pretty strong motivation from Jennie to step it up on Day Two. 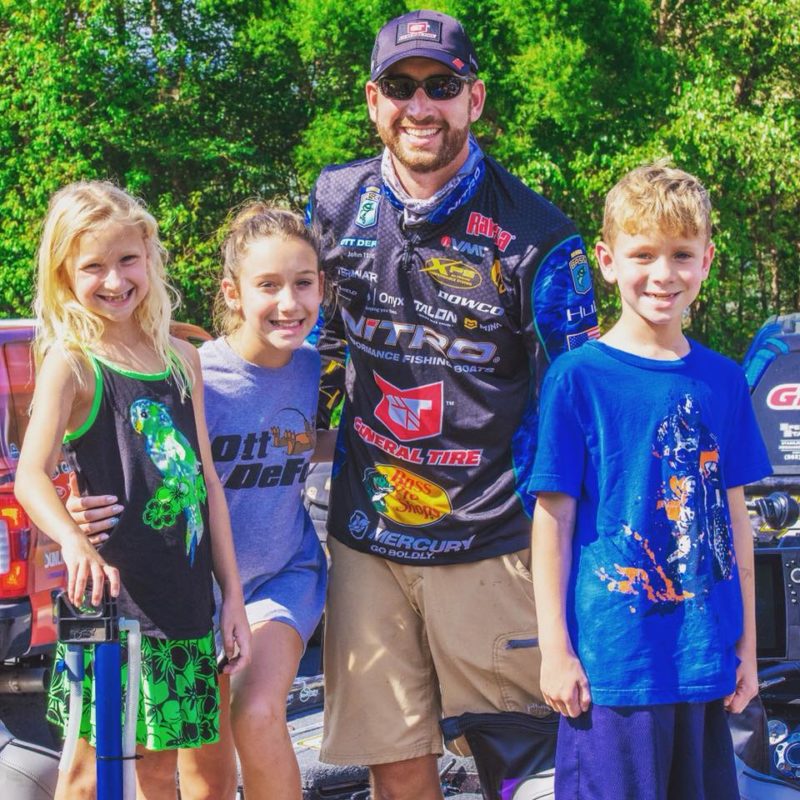 On the second day of competition I intended to fish a deeper section of the creek where I hadn’t spent much time the first day. I started up past that and managed a couple of small keepers, then worked out toward that zone. I quickly amassed a limit, including a 3-pound spotted bass on a dropshot for my limit fish. Then I culled twice in the deeper section of the creek. I couldn’t see the bottom or the fish there – it was a channel swing with some rock on it and by noon I’d put together a pretty good limit.

Late in the day I started to see some fish blowing up on bait in flat, shallow areas. I moved up toward a likely looking brush pile and fired in a big topwater walking bait. Unfortunately, I made a bad cast and my line draped over the meatiest part of the brush. As I eased over to try to get it free, I jerked once and my line got tangled. I pulled again and a good fish smoked it. I was fortunate to get it out of the thick cover and into the boat because that 2-pounder culled out a bare keeper.

I ended up catching about six keepers (out of a total of 15 for the day) in that last hour. They were really chasing bait consistently and eating my lure well. With over 12 pounds, I moved up quite a bit and made up the AOY points I’d lost the day before.

After an off day, we came back out on Sunday and I once again started where I’d begun on Day Two. There was a little bridge in the back of the creek and it didn’t produce, nor did I catch any when I went behind it, but things got fun as I worked my way back out. I threw my topwater up against the bridge and one smoked it right on the corner. I swung it in and it was about 4 ¾ pound. My first fish of the day was my biggest so far that week. I was pumped. After missing a good one around a dock, I worked back up to the other corner of the bridge, put my topwater right up against the concrete, turned the handle twice and an even bigger one crushed it. This one was about 5 ½ pounds, and with just two bites I was over 10 pounds.

Things got tough after that and I missed fish in just about every way possible. Some bit my worm in half. Others blew up on the buzz toad but didn’t get hooked. I ended up filling out my limit, but the last three were just one-pound keepers and after getting off to such a strong start I ended up with only 13-01. Still, that put me in 18th place overall, which meant that I hung onto 4th place in the AOY standings. While 3rd had been mathematically possible, it would’ve been a stretch, while dropping was much more likely, so I was glad to stay put. 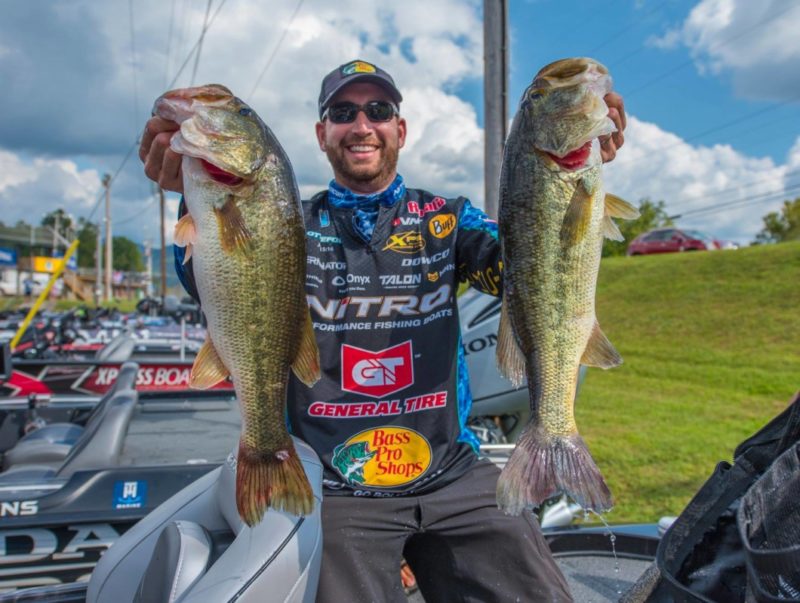 My most productive presentation in this tournament was dropshotting a Bass Pro Shops Tri-Color Worm in oxblood. I fished it on a CarbonLite 7’2” medium-lite spinning rod paired with a CarbonLite reel spooled with 10 lb. test Hyper Braid. I added a leader of 8 lb. XPS fluorocarbon and used a 1/8 ounce Swagger Tungsten weight and a 2/0 VMC worm hook.

It was a good way to end the year, and after a few months of rest, business and other projects I’ll be back on the water for the Classic. It’ll take place in Knoxville, right in my back yard, and I’m anxious to take the trophy home in front of friends and family.