This tournament marked the first time that B.A.S.S. held a tournament in which the entire field alternated between two lakes over the course of the tournament. We’ve fished Bull Shoals twice in Elite Series competition and one time I’d finished 36th and the other time I just missed a check by a few ounces. The only time I’d been to Norfork was for a sponsor event and I never wet a line, but I expected that it would fish similar to Bull Shoals. That was fine with me because Bull Shoals sets up a lot like the lakes I’m used to back in East Tennessee.

We were given the option to spend our practice days on whichever lakes in whichever order we preferred. I decided to do it the same as the tournament, with Norfork on the first and fourth days and Bull Shoals on the two days in between. That way, on the day prior to the start of the tournament I’d have the most current information on the place we were actually fishing.

On the first day of practice on Norfork I put in up the lake and went way up the river. I didn’t go back in any of the big creeks, but rather looked at what the main arm looked like. It was pretty much what I expected, and got cooler and clearer as I went up. Getting bites was not a problem up there, but size was an issue. I caught a few keepers (including keeper spots) but there were a lot of fish in the 14 ½ to 14 ¾ inch range that wouldn’t help you. My best bait was a Chatterbait and to get bites you had to fish it really slowly. If you reeled it in at a normal pace, you wouldn’t get any strikes. You almost had to yo-yo the bait, and I’d never feel the hits – they’d just swim off with it. I felt like that area had the potential to produce 10 pounds, so I spent the rest of the day exploring some coves with docks that I knew had big fish potential.

On the second day of practice I launched on Bull Shoals, a lake where I’ve had success this time of year throwing a wake bait in the middle of coves. The fish school up in the mornings and you can find largemouths, smallmouths and nice spots all ganged up together. That was the case this time around. I found schooling fish both mornings on Bull Shoals and knew that I could spend the rest of the days looking for a flipping bite in the bushes.

As I looked for more fish I located one flatter area that seemed to have a better overall quality. I caught a 4 pounder, which is what you need for a kicker there every day, and shook off a few more that felt like good ones. I was just fishing down the bank, not looking at them.

On the final day I went back to Norfork and tried to figure out the schooling fish there. One area seemed pretty good and I saw a few fish on beds, so my game plan was similar for both lakes – start with the schoolers and then move to bed fish on Norfork and flipping bushes on Bull Shoals.

A fog delay cost us a couple of hours of fishing on the first day of competition and I felt like I’d shot myself in the foot by depending on the schooling thing. Nevertheless, I ran to my schooling place and accidentally stopped short of the point I intended to stop on. That proved to be a good thing because on my third cast I caught a fish that was almost 3 pounds. The bass only came up schooling for me one time and I only managed to catch two short smallmouths when that happened. I fished my way out toward where I’d caught the good fish and caught a short and lost a decent fish along the way. Then the topwater bite was totally over.

I went back to the area with docks and was surprised that nobody else was around. I found a pair on the bed – the female was a keeper and the male was probably close. She left, but I fished for him and after 10 or 15 minutes I figured it was hopeless so I pulled up my Talons and made one more flip. Of course then he decided to bite and luckily he was 15 ½”.

I headed out of the pocket on the trolling motor and spied a good one sitting by the rock. I pitched it, he bit, I set the hook and he immediately came off. He didn’t leave, so I figured he’d bite again, but after 20 or 30 minutes of trying he showed no interest. I had two fish in the livewell when I should have had three.

At this point it was after noon and I saw a laydown with a big white spot in it. I threw my shakey head in, the fish picked it up and started swimming off. It was a 1 ½ pound spot, which gave me three fish. After that I left for a big pocket that I knew had a lot of fish. Andy Montgomery was there when he arrived and told me that he’d caught 13 pounds pretty quickly that morning. He let me try to catch one fish but it wouldn’t bite, so I moved back to a shallow bed I’d located. On my first cast with the wacky worm it bit, then jumped and came off. The worm had just folded over on the hook and prevented the point from sinking in. It was now 1:30 and I had three bass for about 6 pounds instead of the limit I’d expected.

I worked to the back of the cove on the left side as Koby Krieger worked down the right side. I saw him reel in a fish and cull, then he culled again. We’re good friends, but we weren’t yet in talking distance. As I neared him, I asked him how to catch two fish. He said he was throwing a straight tailed watermelon worm so I switched to something similar.

Quickly I came to a bed with a pair of fish on it, including a 2 ½ pound female, but I couldn’t get either one to bite. Then I made a long cast to a tree, picked up my line and there was a fish swimming away. It was a non-keeper and I lost it, but that caused the light bulb to go off in my head. I quickly made another long cast down the bank as far as I could and caught my fourth keeper. Ten feet down the bank and another long cast later I caught number five. That was the trick – location didn’t matter, a long cast did. I culled a few more times up to 11-08, which had he in 40th place. I was a bit disappointed that I didn’t land the 13 pound bag that bit.

I was looking forward to Day Two on Bull Shoals because I felt that I had a good chance to catch a quality bag. I hit my best three or four schooling pockets and only had one decent bite on the wake bait and I totally missed it. Instead of a quick limit, I had nothing. At about 9 o’clock I started fishing in a pocket where I knew there were a few good spots and some decent largemouths. I found what I thought was a 2 pound spot, but when I finally caught it, she was over 2 ½ pounds – 15 inches long and maybe 15 inches around. Then I caught another one about the same size.

There was a place where I found two beds together, close enough that I could park my boat and fish for both fish. One had a good spot and 15 feet away was another with a largemouth that was definitely bigger. I camped on them for an hour but neither bit.

At 11 I left to flip bushes and pretty quickly caught a keeper spot, and then my fourth fish, a 3-pound largemouth. After landing a couple of short fish, I finally caught a 3 pound largemouth flipping to fill out my limit. I had five and only one of them was less than 2 pounds.

Pretty quickly I caught another 2 pounder which enabled me to cull, and then I caught a 2 ½ pounder off a bed. That was my day – three sight fish and two better ones flipping, for a total of 14-03, which moved me up to 26th place.

On Day Three I resolved not to mess around with the schooling fish. I was just going to go flipping immediately. Right off the bat I hooked a decent fish but it wrapped me up and came off. That’s something that happens. It was frustrating, but I guess I should be glad that it was the first time it had happened all tournament. As I worked my way into a cove, I found two bedding fish, but despite trying for an hour I couldn’t get either one to bite. That made me angry, especially the spotted bass that wouldn’t move away from the bed. As I trolling motored away I slapped the water with my bait to scare him and to express my frustration.

I ran up the lake to a small pocket with some docks where I’d seen several good fish. I felt that it was my best chance for a limit. Pretty quickly I found a 3 pound largemouth that was committed to a bed. First I hung him and lost him. Then I broke him off on a dropshot. At that point he was pretty angry at the world and on my third try I finally caught him. I stayed in that area almost the entire rest of the day and I saw a 20 pound limit, mostly cruisers, but the only way to catch them would’ve been dynamite or night fishing.

With 15 or 20 minutes left in the day I headed back to the bushes to flip. I culled once, and it was actually my best fish of the day, bringing me up to 12-12. It helped me, but I still fell six places to 32nd, which was my best Elite Series finish of the year so far.

I did much of my damage in this event with a wacky rig, specifically a watermelon seed Berkley Bottom Hopper fished on a 7’2” medium-action Fenwick World Class spinning rod with a Pflueger Patriarch Size 35 reel. I spooled it up with 10 lb. green Nanofil and a leader of 8 lb. Trilene XL fluorocarbon. 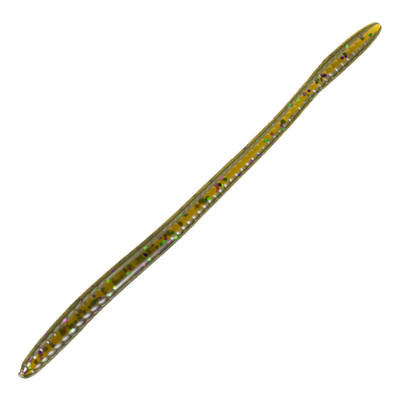 When I flipped the bushes I used a creature bait paired with a 5/16 ounce tungsten weight and a 3/0 VMC Heavy Duty Worm Hook. I fished that rig on a Fenwick World Class baitcasting rod with a Pflueger Patriarch (7.9:1) spooled with 17 lb. Trilene 100% Fluorocarbon.

I was leery of the dual lake format heading into this event, but in hindsight I really liked it. Unlike most tournaments, there was no saving fish for another day. You had to catch as much as you could every single day and that made this “shootout” a lot of fun.