Coming off a 99th place finish at the St. Lawrence, it would’ve been easy to get depressed about losing my lead in the AOY race, but as odd as it might sound it allowed me to fish more relaxed at the next tournament. On the one hand, sometimes a terrible tournament like that one leaves you feeling like you might never catch a bass again, but that’s not possible at an incredible fishery like Champlain. I’ve been there quite a few times over the years, and although my results have been all over the map, it’s one of the most exciting and fertile places that we visit.

While Ticonderoga has historically been a well-known hotspot, I’ve only fished south on Champlain one time before and I don’t really like the long (and often very rough) run. The times I’ve done well have been north so I wrote the southern end off. My plan in practice was to split my time between largemouths and smallmouths and to spend all of my time north of Malletts Bay.

I got into a good smallmouth bite pretty quickly. I wasn’t quite catching them “at will,” but there were plenty of 3 to 3 ½ pounders in the mix and I felt pretty confident that I could catch a decent bag that way. That left me a lot of time to focus on largemouths, and while they were harder to come by, I caught and saw a number of them over 4 pounds which had me pretty excited. In fact, on one spot I caught one a little bit under 4 pounds, then caught a 4-plus, and there were five more following it that were every bit as big.

The first day of competition ended up getting canceled due to high winds. While many people thought it was a borderline call, I was fine with the decision. I don’t like getting beat up and I knew that it would give my protected areas a little bit of rest. I don’t envy Trip Weldon – he has an incredibly difficult job.

My first smallmouth spot had produced well with a Storm Arashi Spinbait under cloudy conditions, but when I got there around 10:30 it was bright and there was not much wind. I lost a couple quickly and then caught a few, including one over 3 pounds. By noon, I had around 14 pounds, but no real good ones, and I knew that I needed to abandon that area, too. Fortunately I was in the last flight and had a 4pm check-in, so there was plenty of time to make up ground. 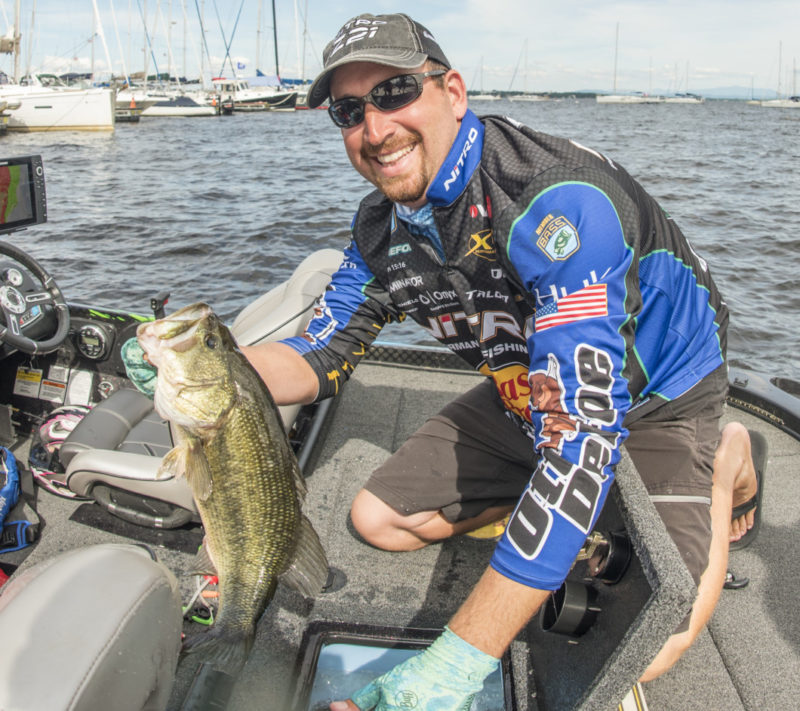 I knew that my best bet to cull up would come through largemouths so I headed back to my starting spot, the same place where I’d seen a big group in practice. I quickly caught a 4 ¼ that had another one the same size with it, but I could never get that second one to bite.

At that point I just went fishing, hitting isolated docks and skipping lures under overhanging trees, and just about anything else I came across. I caught a few on a ¾ ounce Terminator Pro Series Jig and one good one on a frog. Then, right at the end of the day I spent 5 minutes by the ramp fishing for smallmouths and culled a 3 pounder with a 3 ½. That brought me up to 18-12, which had me tied for 10th place. I was happy with the fact that in the afternoon I’d salvaged what had started off as a tough day.

I would have an hour less to fish on Saturday, but I still intended to whack largemouths in the afternoon. The change that I made was to start on smallmouths in the morning, and it was a good call because they were biting like gangbusters. I should’ve had 17 pounds by 9am, but the spy bait is a fish losing sun of a gun, so it took me until 10:30 or 11 to put 16 pounds in the livewell.

At that point I switched to largemouths for a few hours and managed to catch a few, including one really nice 4 pounder that allowed me to get rid of a 3 pound smallmouth and cull up to 17-15. I came within a pound of my first day catch, yet somehow I fell three spots in the standings. That doesn’t happen very often, but the leaderboard was so tight that each cull was critical. I headed into the final day in 13th place, but less than 2 pounds out of the lead. It was very cool heading out there with a legitimate chance to win and I wanted to make the most of it.

Due to the cancellation of Day One, there were 50 of us fishing on the final day. I knew that I wanted to start on smallmouths and once again I had a decent bag early, but not quite as quickly as I should have. At least my landing ratio was a little bit better, and after one really good flurry I knew that I had over 17 pounds. About noon I moved to another smallmouth area and managed to cull up twice more.

After that I spent the rest of the day chasing largemouths and while I didn’t catch a lot of fish, I managed one almost 5 pounds that made a huge difference. I was coming up toward a dock and saw a metal boat lift in front of a gap. The rail of the lift was sitting 6 inches deep. I knew that if I got one on there it could be a rodeo, but it was a prime spot for a big bite. As I was pulling my jig up to the rail I felt a thump and when I was sure that the fish had it I pulled back. I knew that she was stuck good, so I immediately let off the pressure and miraculously the fish swam over the rail. Unfortunately, then it got around the next one. I pushed the button to disengage my reel and aimed the boat right toward it, overshooting my target a bit and crashing into the dock. I got close and my trolling motor got caught in a chain, but I was able to reach down and try to pull the fish in by hand. The waist of my pants was over the side of the boat, but I kept my balance and after a few touch-and-go efforts I got my hand to the big fish and scooped it up. 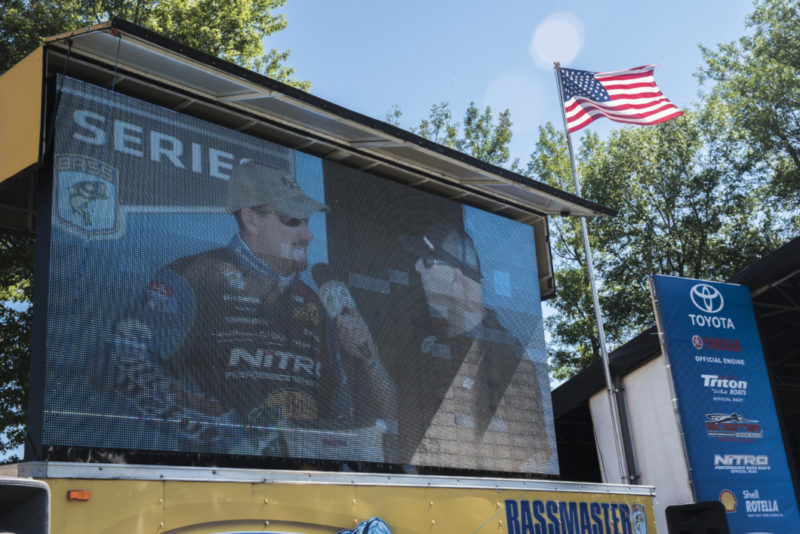 I didn’t think that fish would be enough to win – I was pretty sure that I’d need one more big one for a legitimate shot at victory, and even that might not have been enough given Aaron’s monster final day. Nevertheless, it pulled me to 18-12, the same weight I’d had on Day One, and vaulted me six spots from 13th to 7th.

My best lure for smallmouths at Champlain was the Storm Arashi Spin in Blue Shad. I threw it on a 6’9” medium-light BPS CarbonLite spinning rod and a matching CarbonLite 20 reel spooled with 10 lb. Hyper Braid and a leader comprised of 8 lb. XPS fluorocarbon.

For largemouths, I did much of my damage with a ¾ ounce Terminator Pro Series Jig in blue olive with an Okeechobee Craw BPS River Bug as a trailer. I fished in on a 7’6” heavy-action Johnny Morris Platinum baitcasting reel, with a matching Platinum 8.3:1 feel and 20 lb. XPS fluorocarbon.

The other piece of equipment that made a huge difference in this event was my Lakemaster Mapping. They’ve recently done an overhaul of Champlain, especially the north end of the lake, and it tells me where I need to be, making it extremely easy to run a pattern.

With this good finish I jumped back up to 6th in the AOY race. Next up is St. Clair, a venue that has never been particularly good to me in the past, but I know that I can change that because it’s such a great fishery. In prior events my competition has done well by running out to Erie or Huron, but I have the confidence to stay close, keep my head down, and make things happen. I’m looking forward to the home stretch of the season.