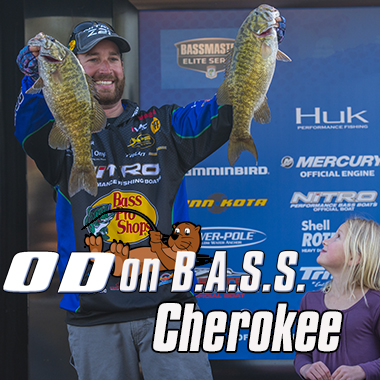 I have a lot of history and a lot of positive memories on Cherokee Lake. It was the site of my first tournament when I was 9 years old. It was where I took a bass boat out for the first time by myself when I was 12. My family had a camper there for four or five years and I fished a lot of local tournaments on Cherokee, so you could say that in a lot of ways it’s responsible for my fishing career. 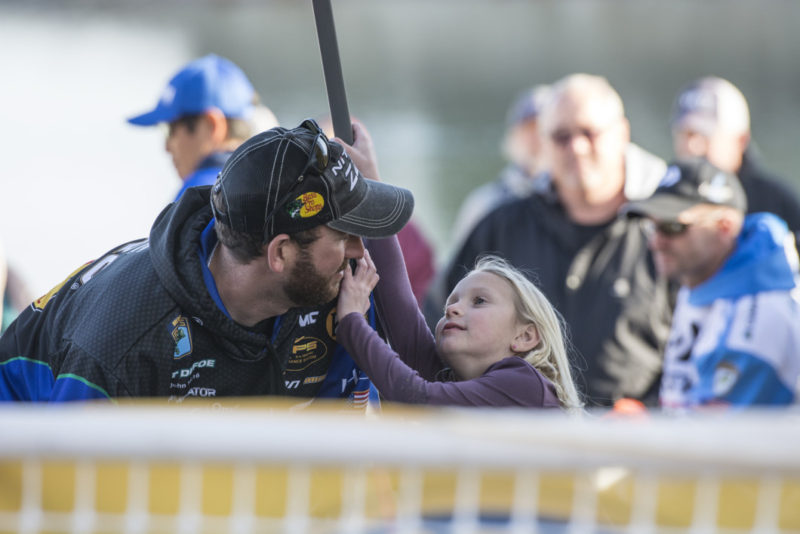 Despite all of that back story, I’d only fished one national tournament there, a July PAA event, and I did horribly in it, so I was cautious not to rely too much on my history. I knew what should be working, and I would check it out, but I wasn’t going to force it.

On the first day of practice I just wanted to see what the lake looked like – the water color and temperature from the dam to the backs of several major creeks and up the river. While I spent a lot of time looking, I also fished in a number of places. I never really tried to establish a pattern, but I fished some decent stuff and all I managed to land were six short largemouths, one small keeper smallmouth on a hair jig, and one small spot on a crankbait. That was a little concerning. I could tell that the bite wasn’t going to be easy on the crankbait like I had hoped.

On the second day I went down lake and fished deep, checking out all kinds of stuff that they were “supposed” to be on. I would occasionally see some, but I wasn’t catching much. Finally I idled off one piece of structure and with my new Mega Down Imaging I saw a wad of bait and some fish next to them. They weren’t where I expected them to be but I was happy to make the discovery. I got a bite on my first drop, but there was a boat going by and by the time I could jerk on the bass he spit it. Then I got another bite and landed a 3 ½ pound smallmouth. On my third cast I missed one and on my fourth cast I caught a 3 pound largemouth.

In the past when I’ve fished deep in the winter on Cherokee it has mostly been with a hair jig or a Silver Buddy, and it’s usually one here, one there. This time I was going to be vertically dropping on schools of smallmouth and they were grouped up. That discovery got me fired up and I spent much of the rest of the day idling and marking spots and I found two or three more places before storms cut the afternoon short.

On the last day of practice I looked for more similar areas and found several more where they were biting well. That really raised my confidence level on the deep bite. I knew I would catch five and had a good chance at 15 pounds, with a shot at 18 if I got a break.

I started the first day of the tournament on a well-known community hole. I hadn’t practiced there, but I knew it could produce a good bag. Short after I got there Koby Krieger arrived, and then Adrian Avena came in and started a little bit deeper. I caught one 2 ½ pound bass and missed another but it was quickly apparent that it wasn’t as good as I’d hoped it would be.

I went across the lake to another area that I liked but the wind had it jacked up. The breeze was pretty strong all day and it never got above 38 degrees. After that I went up lake to a spot I’d hit Wednesday and caught number two before making a move to my best area. I’d caught them in 30 feet during practice, but I stopped out in 33 so I wouldn’t spook them. I got there at 8:30 and had a limit by 9. By 9:30 I’d caught 6 more and I had what I eventually weighed. I didn’t want to beat them up too much and I thought I had plenty of other places where I could wreck them. Despite that confidence, over the course of the rest of the day I only caught two small fish and lost another. That left me in 31st place with 15-02.

While I was happy with 15+, I didn’t believe there was much opportunity to catch a 22 pound limit and 24 was out of the question, so those gaps of a few pounds were going to be tough to leap. I felt like I was going to need 20 pounds each of the next two days to win, and the lake has lots of 3 pounders, but not a lot of 5 pounders.

I started Day Two on the place where I’d caught them the day before and was surprised that it took me 30 minutes to get my first bite. Nevertheless, by 8:30 I had a limit and I made the decision to stay until they stopped biting. I was going to need as much weight as possible and it proved to work out because some of my biggest fish of the day came later. I stayed until 11 and probably caught 20 fish, all vertically, using my graph. It’s not often that I catch that many that way, but except for the fact that my neck hurts a bit it’s a lot of fun. When you get in that good groove you can call your shots.

When the bites slowed down I decided to bounce around but a lot of the other good places I’d found had been discovered by other competitors. Jamie Hartman caught 18 pounds off of one of them and Paul Mueller pretty much camped out on another for the whole tournament. Even though I’d found a lot of good stuff I didn’t get the chance to exploit it and I never caught another fish that day. With 16-14 I moved into 9th place. That wasn’t close to the lead, so I knew that on Day Three I’d have to go upriver to make something happen.

I wasn’t sure how many fish would be left on my main spot after hitting it so hard the day before, but it turned out there were still plenty left on Day Three. With the clouds I had to change my presentation a little, but it was still vertical and I probably caught 12 or 15 keepers. At around 9:30 I knew that bite was going to shut down, so I hit a few more deep places before heading up the river. I was going to throw a crankbait and a jig and try to cull up.

On the way up, I stopped and caught a few little ones on a crankbait, and then I got to one of my favorite stretches of the river. As I approached the prettiest laydown on the bank, everything was setting up right. Davy Hite from BASS Live was there to film me, hoping to see something big happen. The water temperature was 47 degrees, the water was dirty, everything was perfect. I flipped my ½ ounce Terminator Jig in there, brought it over a limb and one jerked on it. He pulled me around another limb and I thought it was a big one, but when I swung it into the boat it was just a decent 3 pounder instead of the 5 ½ pounder I’d expected. I did manage to cull up a few ounces but it was the only cull I made that afternoon and I ended up with 15-04, which kept me in 9th place.

I knew that the river was my best chance to make a move. Cliff Crochet had caught his big bag up there and I know that Tharp was up there too. I resolved that once I had around 15 pounds the next day I was going to leave the deep fish and go up.

My major goal of making it to Sunday had been accomplished, but I felt like it was going to take at least 22 or 23 pounds for me to win. That was a tough order. My main place was fickle that last day, producing just four fish. I hit another spot near the dam to land number five and then I made the run up the river. My next fish was a 3 pound largemouth caught off a rocky point on a DT6. Then I went around the corner, brought my crankbait across the rocks and suddenly lost the feel of it. A fish was surging toward me and when I tightened up on him he pulled hard out to deep water before eventually surging and coming off. I never saw the fish, but I’m 90 percent sure it was a bass and it was at least 4 pounds.

I hit a few more points with nothing to show for it, and then went back to the point where I’d lost that fish and caught three non-keepers. There was a bar coming out into the river nearby and I caught three small largemouths there and then a 3 ¼ pound smallmouth. That left me time to hit a few more places but I never culled again. My weight for the day was 14-13 and that dropped me one place to 10th. In the end, I feel like spending that time up the river was the right call. It just didn’t pay off. I was looking for a miracle and it didn’t happen.

Fishing deep with that little jighead is not something I do much but I dialed it in as the tournament went on and weighed in 17 of my 20 fish on it. Specifically, it was a 3/8 ounce VMC Moon Eye Jig in either Pearl White or Blue Fire UV, paired with a variety of soft plastics in baitfish shapes. I fished it on a 7’ Medium action BPS Johnny Morris Carbonlite spinning rod paired with a Johnny Morris Carbonlite spinning reel (size 30) spooled with 10 lb. Bass Pro XPS Hyper Braid (yellow) and a leader of 8 lb. XPS Fluorocarbon.

I cranked with a Bass Pro Shops Cranking Stick matched to a Pro Qualifier baitcasting reel (5.6:1) spooled with 10 lb. XPS Fluorocarbon. My best crankbait was a Rapala DT6 in the “Old School” color with VMC model 7545 trebles.

My Humminbird down imaging and side imaging were critical to my success, as was my Lakemaster chart. I had my highlight set at 30 feet with a range of 5 feet in either direction. That makes it super-easy to pattern your spots and run from place to place. The fish were holding very tight to the bottom, but the Mega Imaging allowed me to see them clear as a bell. On the front 2D sonar, I could see the fish following my bait and with my 360 I could see schools of bait off to the side, troll over to them, and then drop my bait directly on the fish.

With my electronics so dialed in, it’s kind of a shame (!) that we’re going to Okeechobee – from a deep wintertime smallmouth bite to what is probably a post-spawn largemouth bite it shallow grass. I’ve left my DT6’s in the boat, and maybe a DT10, but nothing deeper. I didn’t even have a box of slip sinkers in the boat at Cherokee, so I had to remember to throw those in, too.

At the Elite Series event on Okeechobee in 2012 I just missed the twelve cut, and in the Opens the year I qualified for the Elites I had a good tournament, but prior to that Okeechobee wasn’t very good to me. It’s the land of the giants and recent weights down there have been good. Additionally, the lake level is just right. All of that together means that I expect a slugfest. The Cherokee finish was my best start to an Elite Series season in seven tries, and the first time I’ve gotten a check in the opener since 2014, so I’d like to keep the momentum going.