Although I’ve fished two Classics at Grand Lake and done reasonably well in both of them, I’ve never fished a tournament there when the fish were really, really biting. Each time 13 or so pounds a day has been pretty good, and 16 to 18 pounds a day kept you in the hunt. Nevertheless, I knew that the lake has tremendous potential, and it fishes similarly to some of the waters around home, so I was confident that this time around I’d get a chance to confirm the lake’s great reputation.

I started the first day of practice in the upper part of the lake, looking for places that were off the beaten path. I wanted to go further than anyone else, or find backwaters that were hard to get into. A lot of my efforts didn’t pay off, but I did find one such area in the back of a creek with clear water and a bunch of fish in it. I had a 5 pounder try to eat my lure, saw another one that was at least that big, plus a couple of twos and threes swimming around. I felt like the area couldn’t sustain me for three or four days, but if I could be the first one in there on Day One it could produce a pretty good bag.

On the second day I stayed mid-lake, fishing areas where I’d caught fish in the past. I fished hard all day and only caught six keepers. One was about 3 ½ pounds, another was 2 ½, and the others were just plain keepers. Additionally, they were pretty random, with no rhyme or reason to their location or what they bit. I never really put anything useful together.

That left Day Three of practice as my final chance to get something going, and under rainy and cloudy conditions I started close to the take-off, but then went up the river again. In one little backwater I managed four or five bites just pitching soft plastics near the bank. I couldn’t see them, but I’m convinced those fish were spawning.

That was the extent of my practice. It wasn’t good, but I knew that my first place had the potential for a big day. It was a gamble going up there, especially because I was in a late flight, but when I arrived I was the only boat there. I headed right to the meat and couldn’t get anything to bite. I eased over to the prettiest part of the backwater and after a few short fish I finally managed to land my first keeper on a bladed jig. Ultimately, though, I stayed too long. Fortunately, I had a long day to work with so there was still an opportunity to make up for lost time.

I headed into another backwater but there were already two boats in there. I headed away from the one closest to me, and managed to add a 2 pounder to my livewell, but quickly concluded that if I stayed in there all day I’d be fishing used water, so I left. My next stop was down river at the area where I’d had the most bites, but there were already five or six boats on the key banks. I pulled in on what I thought was the best remaining stretch but couldn’t get a bite there. Then I moved a short distance and landed one around 2 ¾ pounds, plus a non-keeper. It quickly became obvious that if you were the first one to a stretch that “looked right,” there’d be a fish there, but there wasn’t much use in fishing areas that had been pounded. That led me to leave and hit a stretch that I hadn’t previously fished. Sure enough, on my second pitch I got what felt like a solid bite, but when I set the hook he had me around a stick and my line broke.

By then it was approaching 11 o’clock and I had just three fish in the livewell, only one of them a decent one. I headed further down the lake, making multiple stops, but none of them produced. I even got yelled at by dock owners for fishing their dock. Things just weren’t going my way. Finally, a couple of pockets later, I pitched my dropshot to the bank and as it descended I saw what appeared to be a fish sitting there. I shook it relentlessly and eventually that 3-pounder bit and got lofted into my Nitro. Heading further into that pocket I finally finished out my limit around 2 o’clock.

With a 4pm weigh-in, I still had time to make something happen, and at about 3:10 I pitched my weightless wacky worm and saw something move under it. I’m sure it was a bedding fish or a bass that was guarding something and fortunately it didn’t need too much convincing. I put the 3 ½ pounder in the boat, culled out my smallest fish, and kept on going. 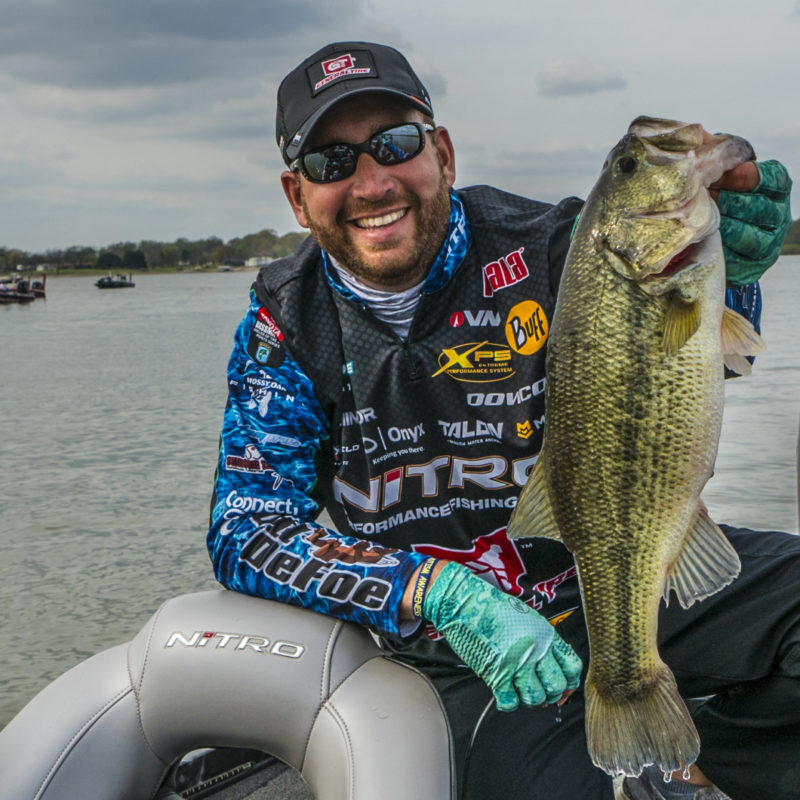 With my limited remaining time I quickly caught three bass that wouldn’t help, then I got the bite that I needed. I didn’t know it at the time, but there was a lot of submerged wood between me and the fish. She got under a log and I was left with the choice to either pull hard and break the line or free spool the reel and hope to capture her some other way. I took the second option, and quickly moved the boat over to the log as she jumped on the other side. I got my hands in the water and tried to find the line, but by the time I grasped it the fish was gone. I’m sure that she was at least 4 pounds, maybe 5, and that really stung. I managed to catch a small bass that didn’t help, then found one that I couldn’t catch off of a bed, and that was the end of my day.

I left the water optimistic because I’d found out that they preferred the wacky warm, and I left some fish on the table. With 14-04 I figured I wouldn’t be anywhere near the lead, but I was surprised and disappointed to end the day in 68th place. I figured that it would take 30 pounds to make the cut but I was shocked at the number of 17 pound and heavier limits that were weighed in.

I started Day Two where I ended Day One, confident that there were plenty of fish still moving up and that the right quality lived there. Aaron Martens started on the other side and if you’ve been around Aaron at all you know that he never stops talking. “Bro, you’re going to regret starting over there,” he said, and then shortly thereafter set the hook into a 4 pounder with a spinnerbait. We agreed to work together and he told me that it was a double willowleaf so I tied one on. Three casts later I landed one around 2 ¾ pounds, and because I was kind of out of his sight I thanked him for the “six pounder.” Then I caught a short, and I thought it was going to be on, but that was the last bite I had in there.

There were other good looking pockets close by, and in the next one I caught a plain keeper with the wacky worm. Then I caught number three, about the same size, on the same lure. I had number four and number five in the boat by 9am, and managed to cull pretty quickly after that.

In the back of the next pocket I saw a 3 pounder on the bed and it took 30 minutes and one miss to get her in the boat. That fish obviously culled, as did the 2 ½ pounder I caught a few minutes later. Then the bite died. I’m still not sure why, but I didn’t manage a keeper bit from 10 until about 2:10. When I finally got the next bite on my wacky worm, a solid 2 pounder, it jumped off at the boat and I just about lost it. I did manage to cull up about a ¼ pound once more, and that gained me a point, but ultimately my 12-03 limit dropped me to 77th place.

It wasn’t my worst Elite Series finish, but it was probably the most disappointing one. Lots of my colleagues caught their fish using techniques that I like and that I’m good at. I was just overthinking things too much, locking in on the spawn, never considering that there would be pre-spawn fish. Fishing was good, and good catches were made all over the lake, and I left Oklahoma pretty angry at myself. 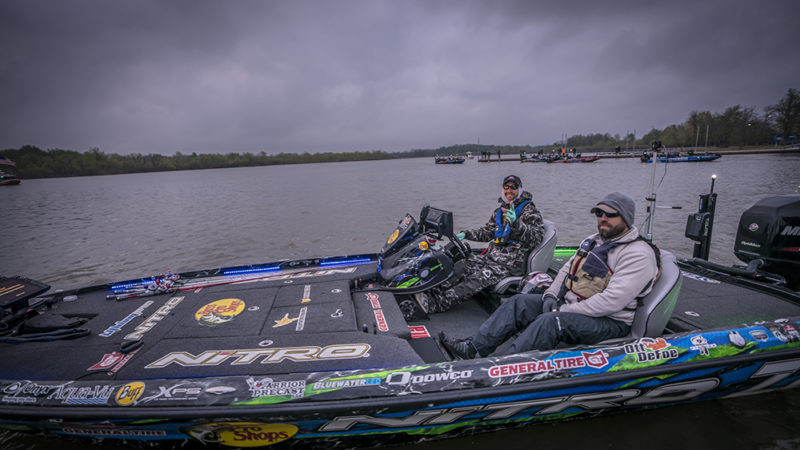 Fortunately, I have great tools that help me catch fish even when I’m not completely on my game. I caught the majority of the fish I weighed in on a Johnny Morris 7’2” medium-action CarbonLite spinning rod with a size 30 CarbonLite spinning reel. I spooled it up with 10 lb. Bass Pro Hyperhttps://www.basspro.com/shop/en/bass-pro-shops-xps-hyper-braid-fishing-line Braid (yellow), to which I added a leader of 10 lb. XPS fluorocarbon. My key bait was a green pumpkin Bass Pro Fin-Eke worm fished on a size 1 VMC Neko Hook. It’s the absolute best hook I’ve ever used for that presentation.

Next up is Kentucky Lake, and just as we experienced at Grand it’s probably going to be a slugfest. You’d better be catching them if you don’t want to get left behind. I’ll be blown away if it doesn’t take at least 16 pounds a day to get a check, so after remaining too stubborn at Grand, if I’m not on that type of fish in practice this week you can be certain that I’ll keep on changing things up until I am.