The last time we visited Dardanelle I had a good tournament, ending up 25th, so I was excited to go back to try to improve upon that result. I know that it’s an ever-changing fishery, but I also knew that I’d be able to keep it simple. As a standalone event without another one in front of it or behind it, I didn’t need to pack anything for fishing deeper than 8 or 10 feet, and I fully expected that most of my fishing would be in less than 5. They’d had a lot of rain in the previous weeks, so I also knew that it would be flowing hard and would be muddy in sections, especially up the river.

I arrived in Arkansas with full intentions of fishing on the main river. Although it would be dirty, I figured that would be an advantage because it would prevent me from having a whole lot of company. The fish there are used to it, so my attitude was “I’m going to fish muddy water and I’m going to like it.” 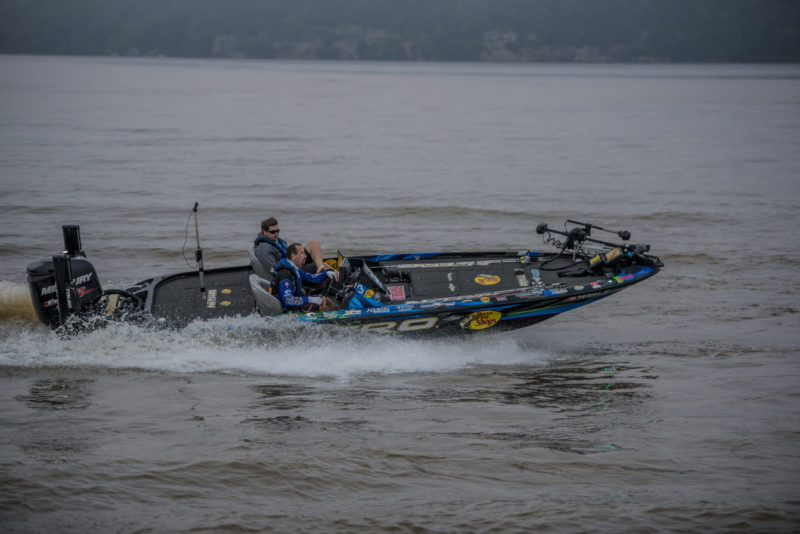 I also knew that bridges could play a role. They always seem to when big tournaments visit Dardanelle.

On the first day of practice I launched at the take-off spot and spent a lot of time upriver, and only had four decent keepers to show for it. Unfortunately, I never found anything I really liked on the first or second day. I caught some good ones on bridges, but other than that they were mostly on the river – the bites weren’t random, but they weren’t really predictable, either. I did eventually find one bay that was fairly clear and had a bunch of fish in it. I caught two, and each time there was a school of fish swimming along with the one I reeled in. They were mostly small, but there were some keepers as well. The sheer number of fish up there was obvious, but the quality was going to remain a mystery until the tournament started.

On the first day of competition I launched with the expectation that the bite was going to be tough and that 11 pounds a day would get you paid. With that in mind I knew that a quick limit would calm me down, and with an early boat number I went straight to a community hole, a bridge corner where I’d caught a big one in practice. I landed a 2 pounder on my second cast and two casts later I added a keeper spot. Shortly thereafter I added another largemouth that was over 2 pounds, which gave me three fish in about 30 minutes.

I stayed on the bridge until I caught my fifth fish, which occurred at about 9:30. The fourth and fifth keepers were small and I left with a limit that probably weighed 7 or 8 pounds. 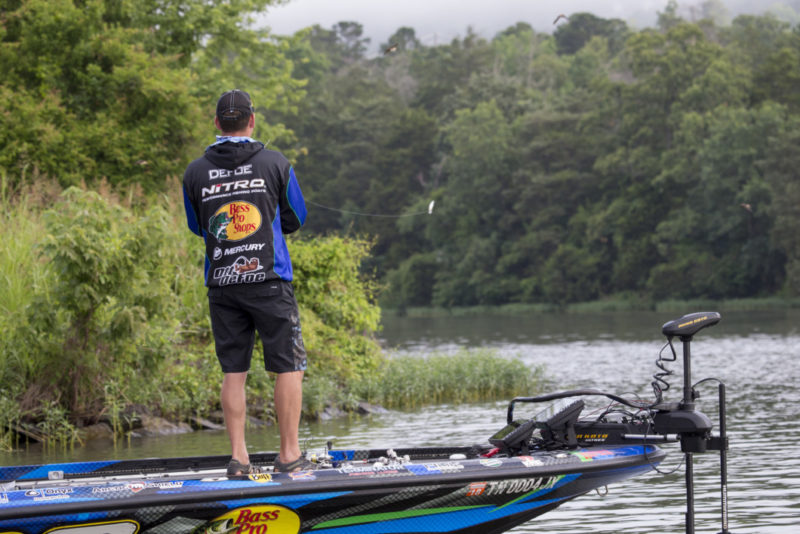 With a limit in the livewell I headed upriver to my school. At the very least I hoped to cull out my smallest fish with a couple of 2 pounders and I accomplished that pretty quickly. Then I caught a 3 ½ pounder on a Rapala DT4 crankbait that provided me with a big cull. It came from a little ledge with stumps along it and I made a few more passes before another one grabbed it. I knew right away that it was a big one, and when it turned out to weigh 5 pounds 15 ounces, I had another really good cull and a very solid bag. At that point another competitor came in, and when I told him how I was doing he was very gracious and exited without another word.

Around 1:30 I left that area and went to another little ledge in that same bay where I’d had some big bites in practice. It didn’t take long to catch a 3 ¾ pound fish on a DT6, which provided me with another quality cull, bringing me up to my eventual weight of 18-12. That had me in second place after Day One, and it was the good start I was hoping for.

With a late boat number on Day Two, I knew that there wasn’t much chance I’d be able to start on my bridge corner again. Sure enough, when I arrived there was another boat there, but he knew I’d fished there the first day and he was kind enough to move off. It was a very nice gesture. I didn’t plan to waste much time there and after one small keeper I left. Partway up to my ledge I stopped on another bridge and landed a little keeper spot, then shortly after arriving at the ledge I finished out my limit.

By 11 o’clock I’d caught over 100 fish. Some of them were white bass, but there were plenty of largemouths and spots mixed in. Unfortunately they weren’t big, and although I left with a limit, I still had a spot and a bare keeper largemouth that I desperately needed to cull out. Stopping on a main channel point, I landed a 14 ½ inch bass that culled one of them. After that I hit some main river rock, and as I brought my square bill back to the boat a 3 pounder short lined me and ended up in the livewell. I managed to cull once more before check-in, up to 10-03, and that helped me to salvage my day without the benefit of a big bite. Clearly it wasn’t nearly as good as Day One, but it wasn’t 5 pounds, either. I dropped nine places, but I was still in the top 12, and with a good bag on Sunday there was no reason I couldn’t stay there.

Earlier in the week I’d seen a lone green tree on a main channel bank where there was a shad spawn going on. I decided to start on it with a spinnerbait on the final day and before my trolling motor was in the water I saw a fish rolling in the tree. The spinnerbait didn’t produce, but switching to a white jig I caught two keepers before the shad quit popping.

From there I worked up the bank where there were some isolated patches of grass, and in the first patch I caught a 3 pounder. By 8:13, I had a limit, and then I culled with a 3 pounder. I’d started the day on new places and already had more weight than the day before.

I arrived at the bay with my best ledge and managed to catch a few small fish, but no keepers. At that point I tied on a big square bill to cover water and try to get a big bite. After several small fish, I finally caught one near 4 pounds which helped quite a bit. I was fishing on the channel, using my Humminbird 360 to locate stumps that came up out of 8 feet of water into 5 feet. At one point my DT6 bumped off of one of those stumps and when it came free it got hammered by a 2 ½ pounder which turned out to be my last cull. I had one more good shot, but the fish pulled off. That one might’ve been the difference maker, because with 12-13 I missed the cut by 10 ounces and fell to 15th overall. I was glad to get out of there with that finish, but at the same time disappointed not to fish into “Championship Monday.”

All of the DT series of baits are fantastic producers. They cast well, run true and dive to their promised depths. To be honest, though, I hadn’t used the DT4 all that much. Now I will. It is one of the best hunting crankbaits I’ve ever used and now it’s one of my confidence baits.

The other tool that helped me immensely was my Humminbird 360. There were other anglers in my areas, but they were generally just making random casts to find the key cover. I could pull up, see the stump, and hit it on my first or second cast without spooking the fish.

As a result of this good finish, I’m back in first place in the Angler of the Year race but I try not to think about it. I have plenty of other stuff to worry about and there’s lots of fishing left to go. Jason Christie had what seemed to be a healthy lead heading into Dardanelle, and as the result of a subpar finish that lead evaporated. I don’t want to get complacent. We’re headed north to smallmouth country next and I’m excited about that. I’ve had some good ones and some bad ones up there, but I’m making good decisions and I’d like to keep that momentum rolling.