Although BASS had visited Lake Martin on multiple occasions in the past, all of those tournaments predated my time on the tour. Nevertheless, I’d done some research into the fishery and I felt pretty certain that limits wouldn’t be hard to come by but that a big bite would go a long way. If you could catch four 2 to 2 ½ pounders each day and one in the 4- to 5-pound class you’d be doing pretty well.

I’d looked at the weather before we arrived and while it had been fairly warm, there was a bunch of rain on the Sunday before we started practicing. That promised to repeat itself on Wednesday, the day before the tournament started, so I figured that Monday and Thursday would have fairly similar conditions. I practiced that way, seeing how muddy certain areas were and eliminating water based on what I observed. 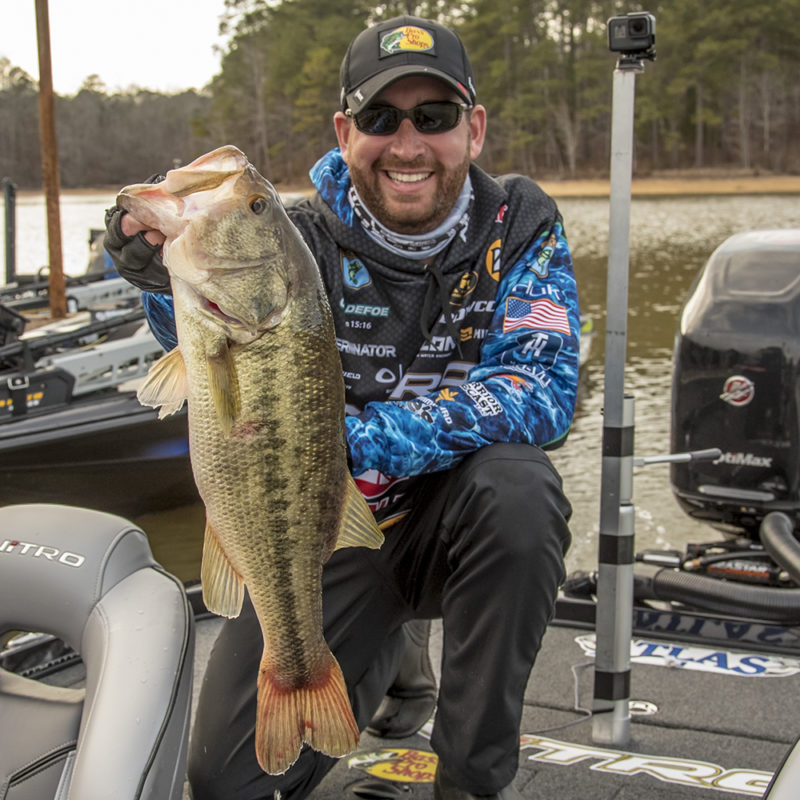 I went fairly far up the river that day and it was rolling orange. That’s not good at 48 degrees, but some of the backwaters were clearer and I managed a few bites in them. There were other boats up there as well, and nothing impressed me enough to consider it a section that I had to fish on tournament day. I spent the rest of the day looking around, not having as much success as I would have liked. Again, I was eliminating water as much as I was dialing things in.

Over the next two days I caught a few out deep and a few shallow, but I never found a good school that would produce multiple fish. I kept trying to find a place where I could land an easy limit of 2-pounders, but the best I could do was one spot where I caught three in the pound and a half range out deep and saw a few more. As the season got ready to start, I had one deep place to start on, one other place after that, and then I was open to the possibilities.

My deep starting spot on Thursday was back in a bay, and I began by fishing a Damiki-style jig. It produced a 1 ½ pound fish, then one a little bit larger, and then I lost one before catching a couple of really big stripers. In total, I spent over two hours there and left feeling that it had been wasted time.

I moved to my second area and caught one about 2 ½ pounds and missed another in the first 45 minutes. By the time I left around 10:30, I had three fish in the livewell and two of them were small. I headed shallow with a bladed jig in a creek and pretty quickly I landed number four, a small largemouth, but I really wasn’t dialed into anything.

I noticed that they were pulling a lot of water, so I sought out some current off the ends of a series of points. That’s what Ott DeFoe knows how to do and I should’ve made the move sooner. On the second point, my third cast with a #5 Shad Rap produced a 2 pound largemouth. The point after that led me to a keeper spotted bass, and the point after that allowed me to cull with another 2 pound largemouth. The last few hours produced a lot of keepers in this manner, and while it saved my day, I was in the first flight so my time was limited. I was frustrated that I hadn’t made the transition earlier. At the same time, it gave me the confidence to crank shallow all day on Friday. I was in 71st place with 9 pounds 10 ounces. That was disappointing, but I was only 14 ounces out of 50th and 3-15 out of 12th, so with a long day on Friday it was distinctly possible to make up a lot of ground.

I didn’t want to start Day Two on my best points because they were exposed and would be affected by the passing boat traffic, so I started off back in a pocket and quickly caught a small keeper largemouth and a couple of shorts on a #6 Shad Rap. Once the traffic died down, I went back to the points that had produced so well the day before and was shocked that I didn’t get bit. They were classic pre-spawn spots and the fish should have been there, but perhaps the dirty water pushing down the lake affected the bite.

While certain areas were dirtying up, the moving color line was opening up new water every day as well. I went to a series of steep points and finished out my limit with the Shad Rap, then I pulled out a deeper running bait and culled two or three times by 9:30. That was tremendously satisfying because the day before it had taken me until noon to catch a limit and I had to weigh-in at 2pm, and on Friday I had a long day to fish.

With a decent limit in the box, the goal became to catch one or two big fish and upgrade my limit. There was a point I’d wanted to fish the day before, but when I got there a couple of crappie fishermen were camped out on the sweet spot. When I got there on Day Two, it was empty. I reached into my rod locker, pulled out a rod with a Rapala DT4, and on my third cast the rod just loaded up under the strength of a 5 pounder. {WATCH IT} At first I couldn’t tell it was a bass, as it kept digging and digging, but eventually it jumped completely out of the water and that got me pretty excited. When I landed it, I noted that I was in fairly dirty water, so I made the decision to head back up the lake into even dirtier water. On one point I caught three fish and culled, then I caught a decent spot out of some brush on a spinnerbait and culled again. That move allowed me to make a huge improvement and my 14 pound limit vaulted me up 52 places in to 19th. 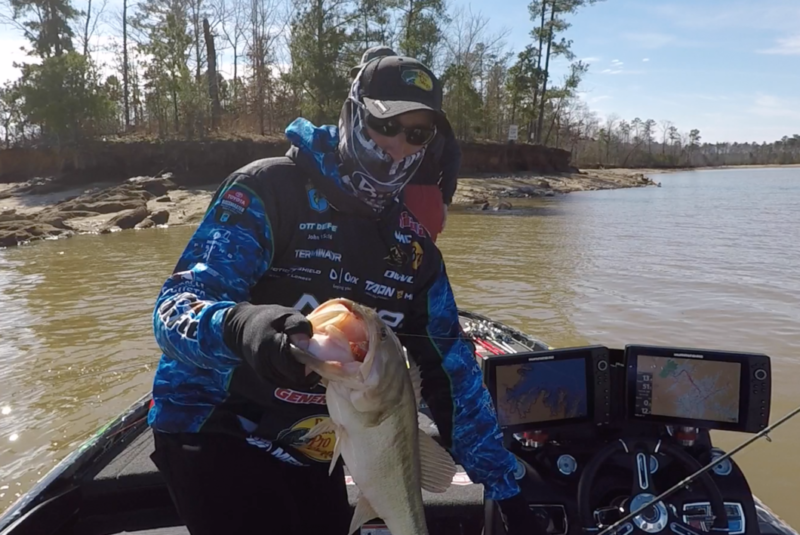 While I was thrilled to make that leap, I was still frustrated by my performance on Day One. In fact, I was angrier than I’d been at the St. Lawrence when I was leading AOY and only weighed in two fish. In that case, it was just a matter of not being on anything good, but at Martin I’d struggled because I didn’t fish the way I know how to. It was a mental error and that failure gnawed at me. Nevertheless, my strong Day Two had me only 13 ounces out of the top 12, and I needed to focus on making up that difference.

By the third day it was pretty obvious that I had to spend my time shallow, and I vowed to fish a substantial portion of the day up the river with a spinnerbait. I started on the main lake and managed a couple of keepers, but nothing special. Then I moved into a creek arm and quickly caught two or three keepers on a spinnerbait and a bladed jig. I caught a 3 pounder on a spinnerbait next to a dock in knee deep water, and that should’ve told me something, but I kept going back to the crankbait.

I hit the spot where I’d caught the 5 pounder the day before, and while it produced several fish, none of them were the quality I needed. Again, I kept reverting to the crankbait even though the spinnerbait was pretty clearly working better. With 90 minutes left I went way up the river and quickly caught a couple of small ones on the spinnerbait. Then I hit a backwater and there was a log just calling out for my Terminator spinnerbait. I cast over there and caught a 3 ¼ pounder that culled out a 1 ¼ pound fish. Shortly thereafter I came upon another prime log and this time the fish actually broke the surface to hit my spinnerbait like a buzzbait, but she missed. At the next log I missed another.

My poor decisions on Day One and those missed strikes at the end may have prevented me from making the top twelve cut. I ended up 13th, just an ounce off the pace. This is my eighth year on the Elite Series and while I’ve had my share of success, it’s amazing how often I still fight myself and this is a perfect example of that. I know that it’s important to do what I’m best at, and I also know that every point counts toward the Classic and the AOY. Nevertheless, a 13th place finish to start the year keeps me in good shape, like last year when I did well at Cherokee, and it’s certainly much better than the starts to my 2015 and 2016 seasons. 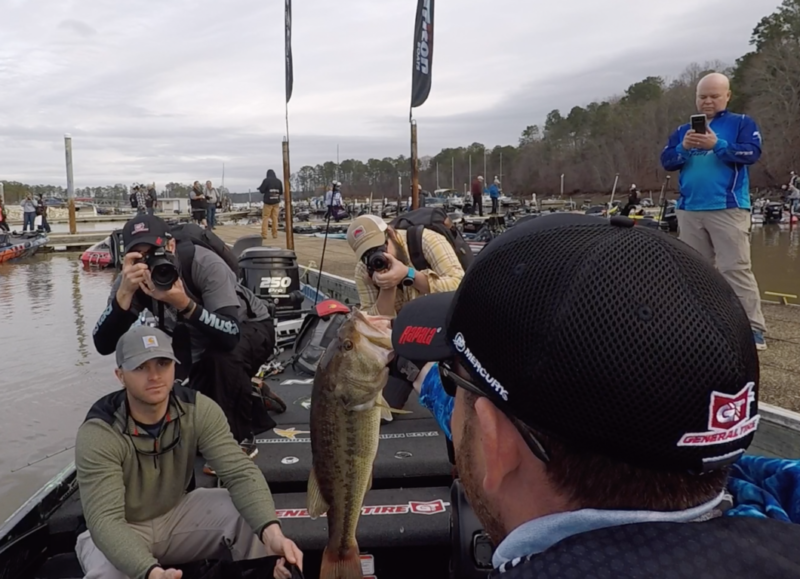 As explained above, I used reaction baits to amass my catch at Lake Martin. I fished a brown craw DT4 on a 7’ medium-heavy Bass Pro Shops Cranking stick paired with a Johnny Morris Platinum reel (6.8:1) spooled with 12 pound XPS fluorocarbon. The #5 and #6 Shad Raps were both custom painted, and I fished them on a 7’ Johnny Morris Patriot spinning rod. I completed that combo with a CarbonLite size 30 reel with 8 pound XPS fluorocarbon. Finally, I modified my ½ ounce Terminator T1 spinnerbait by changing out the skirt and utilizing double Colorado blades. I threw that one on a 7’ medium-heavy CarbonLite rod and a matching CarbonLite reel (7.5:1) with 17 pound XPS fluorocarbon.

Next up is the Bassmaster Classic on Lake Hartwell. I had a decent finish there last time and I’m excited to have another shot at it. It’s a good lake with a lot of big fish and I like the way it lays out. I have a bunch of filming to do between now and then, but that’ll have to be cut off at a certain point so that I can rest up and get rigged up before the most important single tournament of the year.