Prior to this tournament I’d never been to Lake Oahe. In fact, I’d never stepped foot or made a cast in the state of South Dakota. Nevertheless, I was excited for this event to start. The very limited information that was available indicated that the weights would be strong, with lots of 17 to 19-pound bags, and because the lake is big I figured that the fish would be relatively unpressured.

We drove to Oahe straight from La Crosse where I’d earned yet another 13th place finish. Despite those slight disappointments, the year was going well, and I felt good about the way I was fishing. They were predicting some storms at night throughout practice and into the tournament, but the days were expected to be sunny and calm, which is perfect for exploring a big smallmouth fishery.

I spent the first day of practice on the lower end of the lake, within 20 miles of the take-off and overall it went pretty well. I caught several decent fish in the 2 ½ pound range and saw some that were even bigger. They were probably either on the tail end of the spawn or guarding fry, and while there was the potential for a decent bag, I felt those bites wouldn’t hold up for the duration of the tournament.

On the next day I went a little bit further from the ramp, fishing 30 to 50 miles away. I caught one 3 ½ pounder super-shallow, and then went offshore. I never managed to catch them deep, but I could find some schooling fish over deep water.

On Day Three of practice I fished a long way up the lake. If I’d elected to go there during the tournament, it would’ve been an 80 to 100 mile run each way, which would’ve required a stop for gas and limited my fishing time, especially if the wind blew. While the fishing was decent up there, it wasn’t worth the trip and if I didn’t have to go I wasn’t going to commit to that area. There would’ve been too many risks involved.

I started the first day of competition where I’d had the best topwater bite in practice. I landed one around 3 ½ pounds pretty quickly and then added another small keeper. There was another angler in the area doing exactly what I was doing. He caught a couple pretty quickly, and he also lost a few, so I knew that it could work out, but I didn’t really have time to find out. I got one more good bite there that was hooked for a second before coming off. Then a storm blew through and I decided to run away from the storm. In hindsight, it feels like I also ran away from the fish. It got really hard after that and I struggled for a while.

Andy Montgomery had told me about a series of points where he’d located some fish, and when I saw him in the vicinity he waved me over and told me that he’d just caught one a little under 4 pounds and had about 15 pounds in the box. I caught numbers three and four fishing with him, and at the next point I landed my limit fish. Shortly after that I caught a sixth keeper, about 2.5 pounds, which allowed me to cull.

Most of those fish came in 20 to 30 feet of water on a dropshot. There was no reason to drop on them until I saw the fish on my Humminbird electronics. Sometimes they’d turn out to be walleye or drum and they wouldn’t bite, but if you spotted something that appeared to be a smallmouth it wasn’t that hard. Later in the day I caught a 3 ½ pounder on a random point that brought me up to 12 pounds 14 ounces. That had me in 26th place, which was quite surprising. After practice I’d figured that it would take 12 pounds a day to get paid, but in competition it took less than that. I’d had one other bite that I felt could’ve helped me, as I ended up weighing in one fish that was only about a pound, but overall I was satisfied with where I stood. 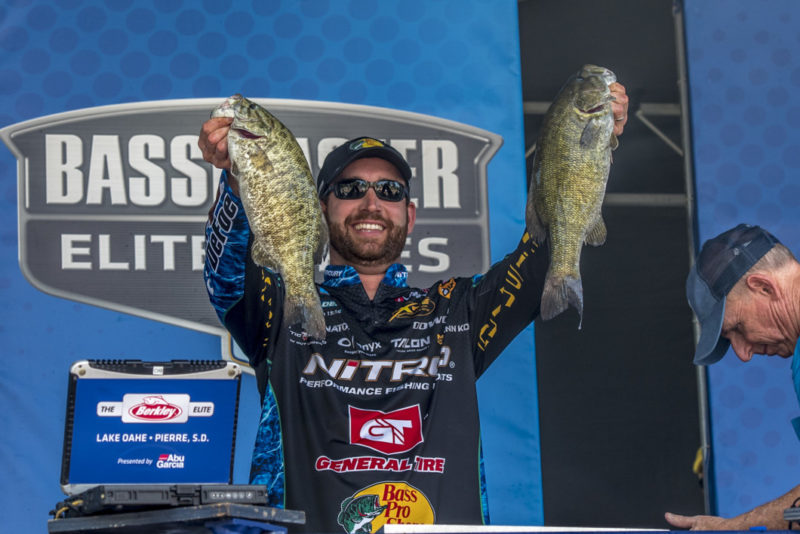 That night a terrible storm rolled through and we were evacuated into the tornado shelter. We were safe, but 20 miles away a tornado touched down and did some major damage. We had a delay of about 90 minutes the next morning due to heavy winds. I started with my topwater once again but all I could muster that way was a lone 12 ½ inch bass. The area had been beaten up too badly. I’d looked at Google Earth the night before and found an area across the lake with a bunch of underwater rocks that looked good, so I headed that way. I caught a keeper right away on a DT6 on a rocky point. A little while later I caught number three on a dropshot on an isolated rock. It was still just a little bit after 9am, but those three keepers weighed a mere 2 ¾ pounds.

I fished and fished and fished with nothing more to show for it, and then went out deep to start looking with my electronics again. Unfortunately, that bite never got going. I’d seen some schooling activity above the first bridge earlier in the week where I figured I could catch 10 pounds easily, so at 11 o’clock I packed up and ran 35 miles. Once again, though, my timing was off. The bass never really schooled. It was just one here, one there.

Running out of options I went shallow to try to catch what I assumed were spawning fish that I couldn’t see, but the combination of wind and rising water shut that down. By then it was almost noon. I was in the first flight and about an hour away from the take-off. I moved to a nearby point and spotted a rock on my Humminbird 360. I pitched my dropshot over, had a fish on and when it pulled it came off. Then I caught keeper number four, but it too was barely over 12 inches and less than a pound.

I moved over to some shallow bridge pilings and quickly caught my fifth fish on a Storm Spy Bait. I had a limit, but I bet they didn’t even weigh four pounds. With limited time left, I headed down the lake in search of an elusive 2 ½ to 3-pounder. I was running at about 55 miles per hour through a 1-foot chop, going across points that topped out at 15 to 20 feet. At one point I could’ve sworn I saw a fish blow up close to the boat, basically right underneath the trolling motor. I made it another quarter mile before I decided to go back and investigate. I could at least give it a few minutes. I idled up to the point and started fishing, then heard a blowup and turned to see a baitfish skittering across the surface toward me at 100 miles an hour. I threw my walking bait in there and a 2-pounder blew up on it, which allowed me to cull out one of those tiny 11 ouncers.

That last topwater fish was the end of my day. I’d caught six keepers, the best five of which weighed 5-11. With 18-09, I figured there was no way that I’d make the cut, but I sweated all the way through the weigh-in and was pleasantly surprised that I squeaked in with a couple of places to spare. It was tight, but I was pumped and excited to get another crack at those Oahe smallmouths. After all of those 13th place finishes, it would be tough to get back to even that spot, but with a big bag anything could happen. 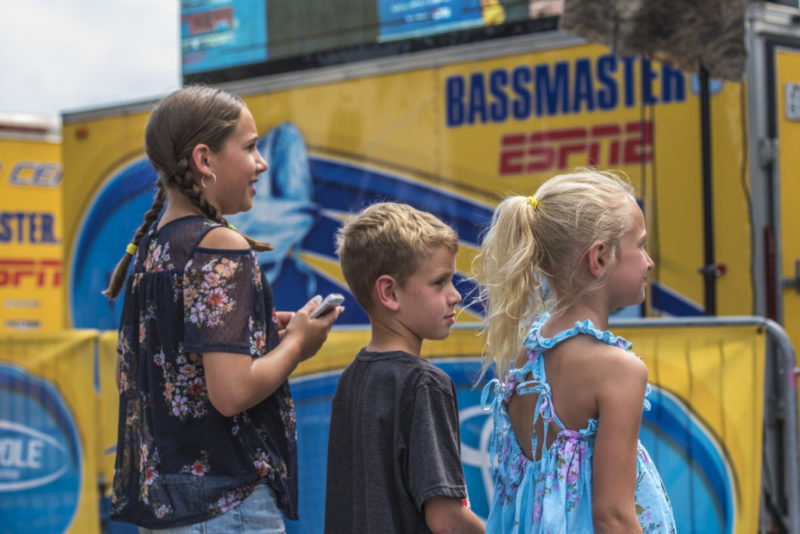 On Day Three I started with the topwater once again, but I didn’t give it much time because I wanted to get offshore. I caught a small keeper early on a dropshot. Number two came in a similar fashion, in 12 or 13 feet of water in a spot I’d found in practice. I saw it on the graph, dropped my lure, and pulled up a fish. After that I bounced around from point to point, in depths ranging from 10 feet to 25 feet. Somewhere on almost every point there would be a fish or two, but there wasn’t much size. I caught a 2-pounder and one about 2 ¾ in 30 feet of water, close to where I’d caught a good one the first day, but my first five probably weighed less than 8 pounds total. That was what I carried in my livewell for most of the day.

As time wound down, I saw a point that the wind was hitting perfectly. As I approached, I saw two fish on my graph in 23 feet of water and I caught the two 2 ½ pounders back to back. With 30 minutes left to fish I slid out to 27 feet, saw two more and caught them as well. I waved in David Mullins and he caught one, too. As time ran out, I’d culled four of the five fish in my livewell with the dropshot and improved my weight by over 4 pounds. None of them were really big, but they were all from 2 ¼ to 3 ¼ pounds and they made a huge difference. I wish I’d had another 30 minutes there to see if I could have improved even more, but overall it was a great way to end an event that was tougher than expected.

My 13-03 lifted me back to 34th place. Overall, I was happy with the event. I had a solid tournament on a venue where it would’ve been really easy to strike out and that’s always satisfying. I think we just hit the lake at an “off” time. It has huge potential and I’d love to go back.

My Humminbird Helix 12s made a huge difference in this event. I saw almost all of the fish on 2D sonar before I caught them. Some were sitting on the bottom and others were 10 feet off the bottom, and without accurate electronics it would’ve been easy to fish under or over them. My Nitro Boat and Mercury Outboard also played a critical role – we were making long runs in pounding waves and I never missed a beat.

I caught almost all the bass that I took to weigh-in by dropshotting a wacky-rigged green pumpkin finesse worm. I fished it on a Bass Pro Shops CarbonLite 7’2” medium-lite spinning rod paired with a CarbonLite size 30 spinning reel. I spooled it up with a main line of 10-pound test BPS Hyper Braid and a leader made of 8 pond test XPS Fluorocarbon. My hook was a #2 VMC Neko hook and I used a 3/8-ounce Swagger Tungsten weight.

I’m now in fifth place in the Angler of the Year race, 63 points out of the lead. That may seem like a lot, but with “two and half” points tournaments left to go, anything can happen, and I feel like I’m fishing well. Next up is the Upper Chesapeake Bay where I finished 43rd two years ago, and I’m not going to let off the gas until the season ends.