While B.A.S.S. has held several Opens on Ross Barnett in recent years, I hadn’t fished them, so it was a totally new tournament venue for me. Based on my research, I knew that it is a shallow, stumpy lake where it can be hard to get around, but I didn’t know whether it had a lot of fish or would prove to be stingy. Most importantly, I understood that it was going to fish small, so I vowed to factor that into my game plan.

I covered the lake from end to end in practice, trying to find areas and spots that would not receive heavy pressure. That included going as far up the river as I could venture. That’s the area where it was eventually won, although I never really found the winning pattern. What I did find were several upriver backwaters that didn’t hold any tournament boats during practice. I knew that’s where I’d spend a substantial portion of the tournament, but I also found a few key areas on the lower lake. If I could fish them effectively then I might be able to save some of my best backwaters for later in the tournament.

There was a little bit of a shad spawn going on, so on the first morning of the tournament I started on a stretch of riprap on a bridge and pretty quickly caught a couple of 2 ¼ to 2 ½ pound largemouths. After that I went upriver and started throwing a buzzbait in a backwater where I’d had some good bites the day before and ended up catching a couple of small keepers.

There were boats everywhere, so I made my way back to the bridge and eventually filled out my limit. I also caught my sixth fish there, a 2 ½ pound largemouth that culled out a small spot.

By that point it was 11 o’clock and I had a decision to make. I was 10 or 15 minutes from the launch, but my best area up the river was 45 minutes away. I was in the last flight so I made the decision to make the long run. Half of the time was consumed with idling and I wondered the whole time whether I’d made the right choice. Shortly after entering my best backwater, I caught a few small fish, but then I landed a 3 ½ pounder, which provided a good cull. After a few more small ones, I caught a 3 pounder, which helped me even more. With a 3 ½, a 3 and a few in the 2 pound range, I knew that I had the makings of a decent bag.

Needing a kicker, next I moved into a backwater where I’d caught a 5 pounder in practice. I quickly landed two keepers that wouldn’t help before catching one that would help me cull up a few ounces. Then I caught another small keeper that didn’t help. I knew that there were more fish in there, but I also knew that things might get tough later in the tournament and I didn’t want to burn that area, so I left with my final weight of 13-03. That had me in 32nd place, just one big bite short of being much higher in the standings. 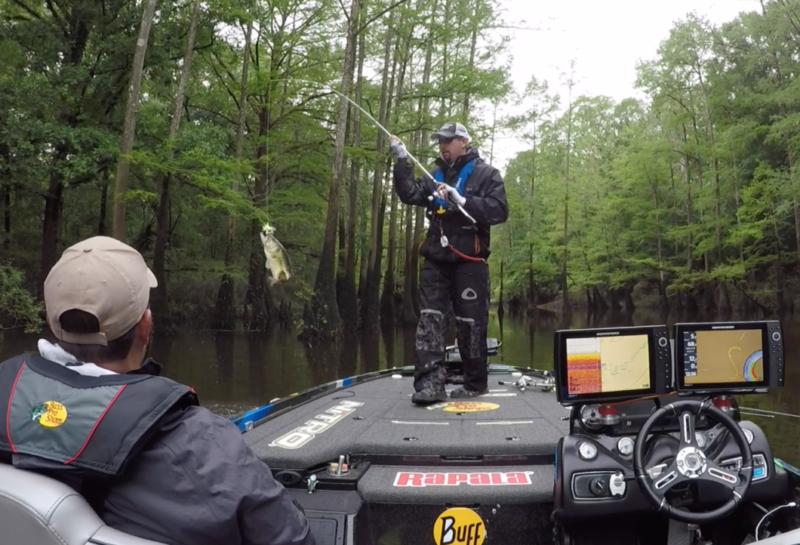 There were a few big bags on the first day of competition but overall it was tough and I expected the second day to be even tougher. Once again I started on the bridge, milking it as effectively as I could and it paid off with a limit, including a couple that were over 2 pounds. One or two came on a swim jig and I caught the rest on a bladed jig.

Sometime after 9:30 I went up the river and in my first backwater I caught a couple of keepers, but no big ones. Then I caught a 3 pounder in the next area, which allowed me to cull, but after that I was only able to cull up a few ounces. I had more keepers than on the first day, but no quality. I figured that I had somewhere around 9 pounds and would be right on the cut, but I ended up with 10-08, which squeaked me into the cut in 46th place. More importantly, it got me paid and gave me another day on the water.

The wind blew hard the first two days against my key stretch or riprap. That usually doesn’t mess up the shad spawn, but in this case it appears to have done so. Shane Lineberger and I both started on the bridge that final day and neither of us caught a keeper there, just a few short fish. At 9 o’clock I headed up the river to hit some of the backwaters. In the first one I caught a small keeper. I figured that it would be a bonus fish, or I might even cull it out later in the day.

In what I considered to be my best area, the mud had pushed in on Day Two, but by Day Three it had cleared out again and looked perfect. I fished the whole thing thoroughly and only caught two little bitty ones. There were a couple of local boats in there and I allowed that to get in my head. They left before I did and when I entered the next backwater they were already there. Once again, that bothered me and I feel like I spent the remainder of the day just banging my head against the wall. I never caught another keeper.

The lone fish that I brought to weigh-in weighed 1-14 and it dropped me to 51st place. That was a huge disappointment because I sacrificed some valuable points. Even a move up to 35th would’ve been a big help, but instead I ceded some ground. Usually I’m very good about doing something different on Day Three when I’m not in contention to win, but in this case I stayed locked into what I had been doing and it bit me. I hope that it doesn’t turn out to be my biggest regret of the year. I’m pretty mad at myself for not adjusting, not trying to find someplace different on Saturday.

I caught the vast majority of my fish at Ross Barnett on a ½ ounce chartreuse and white vibrating jig with a 3.8” Bass Pro Shops Speed Shad for a trailer. I fished it on a 7’ medium-heavy Johnny Morris CarbonLite rod paired with a 7.5:1 CarbonLite reel spooled with 17 lb. XPS fluorocarbon.

Next up is Sam Rayburn. Unlike Ross Barnett, which fished small and stingy, I expect this one to be wide open, with big bags and tons of fish caught in a variety of different ways. There’s lots of information indicating that Rayburn might be the best public lake in the country right now, and I’m looking forward to finding that out and getting my season headed back in the right direction.