The Sabine River has never really been my friend, and with changing rules about where we could and couldn’t fish, I broke my cardinal rule and pre-fished before the place went off-limits. With the changes to the playing field, there was one area that I wanted to check out. My time there would either put it in play or rule it out.

I spent the day there and the bite was ok. I might’ve had seven or eight keeper bites, with a few over 3 pounds, but I was the first one fishing those areas and they didn’t shine. I left not overly excited.

When I returned for the official practice I decided to spend the first day close to the take-off site. I had a suspicion that much of the field would wait until the last day to fish close. This way I’d see it at its best and get to experience the full potential. Getting bites wasn’t hard, and I ended up in the area that I eventually fished during the tournament – a big canal with a few offshoots. 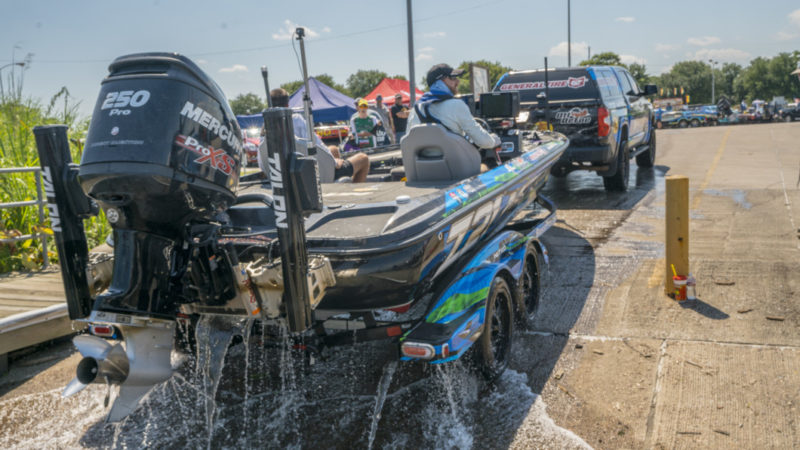 I caught three or four keepers almost immediately, then moved back a fair distance and added another almost 2 pounds. I went back even further and caught one over 3 pounds. That told me that not only were there numbers present, but there were some quality fish, too. I left with a really good feeling about that place and hit a few more areas. Over the rest of the day I managed a few more keeper bites, but they weren’t the same quality or in the same concentrations. To be honest, I was surprised that there were so many fish in that canal – I figured that with water temperatures starting the day at 85 and getting up to 92, they’d be out in the main river in the current, but they were still back in the canals.

On the second day of practice I put in at Taylor’s Bayou, an area that has historically been pretty good, but I fished there until 10 or 11 o’clock and only managed two little keeper bites. The water quality looked decent, but with the saltwater lock closed it lacked the movement that I’d found in the Sabine. It was stagnant, which made the bites random. At 11 o’clock I came out of there and worked my way back, hitting stuff I’d identified on Google Earth, but I never found much. Jennie picked me up near the take off.

On the final day of practice I launched near the take-off again and ran out toward the Gulf. I caught some keepers, with my best 5 totaling probably 6 ½ pounds. It seemed to me that once I got out of the Sabine, I couldn’t catch a fish in the 2-pound class or better, so it made my decision of where to fish during the tournament pretty easy. I was excited about that one area because I knew that it should produce limits pretty easily, with the potential for some size.

My only question as I went through boat check on the first day of the tournament was how many boats would be in that little canal with me. In practice I only saw one, but I was certain there’d be more. I was boat #66, in the third flight, and was far from certain that I’d get on my preferred stretch. As I went in, I saw Bobby Lane, Justin Lucas and probably five or six more, and several more came in after me – a total of probably a dozen. 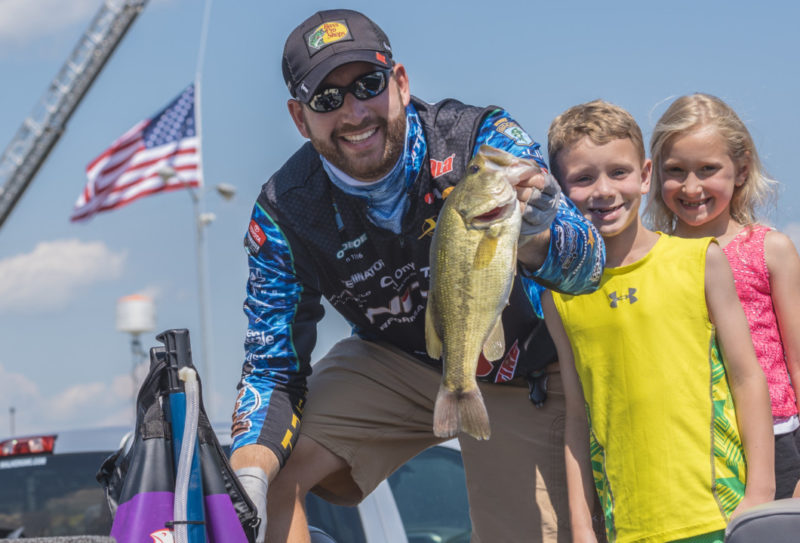 I started off winding a small topwater and had a limit in about 45 minutes, but none of them were over a pound and a quarter. I stuck with that much of the morning as the tide fell. There were a lot of tall trees on either side of the canal, so the shade lines persisted longer than they would have in open water. When the sun finally got up I switched to a black and chartreuse Rapala Brat crankbait. There was one particular bend where I’d caught the 3-pounder in practice, and when I got there around 9:30 I quickly caught a few small ones. Then a good one grabbed my crankbait and ran hard at the boat. As he went by, he had two hooks in his mouth, but one pulled free. Now he was barely hooked on the back hook, and when I went to turn him away from the cover I saw it pop out. That fish was every bit of 3 pounds and it really hurt, because combined with the fish I already had in the livewell, I knew it would just take a 6-pound limit on Friday to get a check.

I culled a few more times as the day progressed, but none of them were over 1 ¾ pounds. As I worked my way out around noon, there was one section where the current was faster than everywhere else and it had a single pretty green tree on top of it. I pitched a Bass Pro Shops Bomb Craw in there, to a spot where there was virtually no water, and a 2-pounder bit it almost immediately. That culled out a little one. I fished a little further down, then turned around and caught a 2 ½ pounder on a crankbait on a cut bank. I knew at that point if I could land one more decent bass I’d have a good day. Shortly thereafter I landed one about 2 ¼ pounds on the Brat.

Twelve to one was definitely the best time the first day. That was when the tide was coming in the fastest, so I registered that fact in my mind, knowing that it would happen an hour later the next day, and an hour later than that on Saturday. I was super-happy with 10 pounds 5 ounces, which put me in a tie for 12th place. I certainly would’ve liked to have had that 3-pounder, but fish losses are inevitable. There wasn’t much else I could’ve done.

I’d rigged up a soft jerkbait rod before the tournament started but I never got it out the first day. On Day Two I put it on the deck in case things got tough. The tide was fairly low when we launched, with less overall movement (not as high, not as low as the previous day). When the water is hot like that, you really want it to move as much as possible.

Once again I started with a topwater, and I had my limit in about an hour. They were small again, with the biggest one around 1 ½ pounds, but it felt good to get that out of my way. The pressure was off. I tried to mimic the timing of my key stretches from the day before, but I also spent some time in the offshoots of the canal to get away from the pressure. That was a good move, because I think I hit some places that other people overlooked, and it allowed me to cull a few times. Overall, though, the second day was not as good – with the water moving less, the fish didn’t position quite as predictably.

At about 10 am I picked up the Shadee Shad soft jerkbait and started casting it on the stretch of bank where I’d lost the good fish the day before. There was one especially pretty cypress tree with a piece of bushy wood on it, and almost as soon as the jerkbait hit the water a good one rolled on it and ate it. I got the fish in the boat and it was 2 ¾ pounds, a key fish and a solid cull. That gave me the confidence to stick with that bait. A little while later a good fish started blowing up on bluegills by the bank. I fired in my lure, got a solid strike, and when I reared back my lure came back without a tail. I’m still not sure how that happened. Then another bass started attacking bluegills in the middle, pushing them to the bank. I threw at the closest stump and shortly thereafter landed one about 1 ¾ pounds, my second-best fish of the day. I ended up with 8-10, and while I dropped to 14th place, I was still within striking distance of the cut.

Heading into Day Three, I still had some distant spots up north in the back of my mind. If it got tough in my best canal, or if it produced only small fish, I’d consider making the run. Then again, I knew that my best tide would be late in the day, so there might also be good reason to hang around.

My first fish on Saturday was just a bare keeper, but my next four included two of about 1 ½ pounds and two more about 1 ¾ pounds. That was a better starting limit than I’d had on Days One or Two, so it led me to believe that I was there for the duration. I had over 7 pounds without a 2 pounder, so one in that class would get me close to the cut. I was pretty sure that 9 pounds would do it, so it wasn’t worth the risk of the run, especially since I knew that there were plenty of 2-pounders in there. I felt sure that I’d run into one of them at some point, even if the best period was likely to be late.

Things got tough after that. I didn’t cull from about 10am until the last 20 minutes before I had to run back to weigh-in. Then I hooked up with a 2 ½ pounder on the Brat. It jumped, shook it’s had, and threw it back at me. On the next corner, though, I caught one almost as big, and immediately had to go. My timing was dead on – I just ran out of time to execute. My 9-01 did not allow me to fish on Sunday. I missed the cut by an ounce, although with the way the tiebreakers worked I really would’ve needed two more ounces.

Despite the near miss, I was super-satisfied with this tournament. I like the Sabine a LOT better now, and I got some good points. While I’m pretty far out of the AOY race, it helped me to solidify my chances of making next year’s Classic, which is my number one goal right now. Next up we’re headed to La Crosse, where I won in 2016, and I’d love to keep the momentum rolling

The Rapala Brat did a lot of my heavy lifting in this event. Even though I was fishing fairly shallow, I used the model that dives to 6 feet. It has a big bill which enables it to come through cover better, and with short casts and the rod tip held up I could keep it in the strike zone. It’s a small bait that comes through cover well, which makes it a deadly tool on river systems like the Sabine. I fished it on a 7-foot medium-heavy Bass Pro Crankin’ Stick paired with a Johnny Morris Platinum reel (6.8:1) and 14 lb. XPS fluorocarbon.

My limit-getter was a small winding topwater that I fished on a 7’ medium-heavy Johnny Morris Patriot rod paired with that same 6.8:1 Platinum reel, this time loaded with 30-pound test Hyper Braid.

Since I stayed close for the entirety of the tournament, I didn’t really test my boat’s capabilities, but I did put my Ultrex to the test. I’m guessing that I made more casts than in any Elite Series tournament I’ve fished. In fact, sometimes when I could’ve put the boat up on plane to make a short run I ended up idling, just so I could take a break and drink some water. The Ultrex makes me more efficient when I’m casting, and I’m not sure how we ever lived without it.