I had no prior tournament history on Sam Rayburn, but after the Classic at Conroe I stayed around for a one-day media event there and subsequently fished the Brian Robison charity event. I’d heard all of the stories about how great it can be, and while I knew it wasn’t exactly the same as Toledo Bend, I figured there would be some similarities. Needless to say, with the promise of big bags I was excited to get this one started.

The lake wasn’t quite at full pool but there was still a lot of available shoreline cover. Nevertheless, it was May, so I expected there to be a strong offshore bite in 10 to 30 feet of water. When practice started on Sunday that’s what I looked for, so I spent lots of time graphing, looking and fishing out deep for the first day and a half with fairly little to show for it. I found two schools out there but they were all in the 1 ½ to 2 ½ pound range and that wasn’t going to cut it.

Finally, at 1pm on Monday I gave up on that bite and went shallow. In the first pocket I fished I caught three or four fish. In the next pocket I caught five more, fishing a worm and a swimbait over the submerged hydrilla in 3 to 7 feet of water. I also found some schooling fish where the hydrilla and the hay grass mixed. 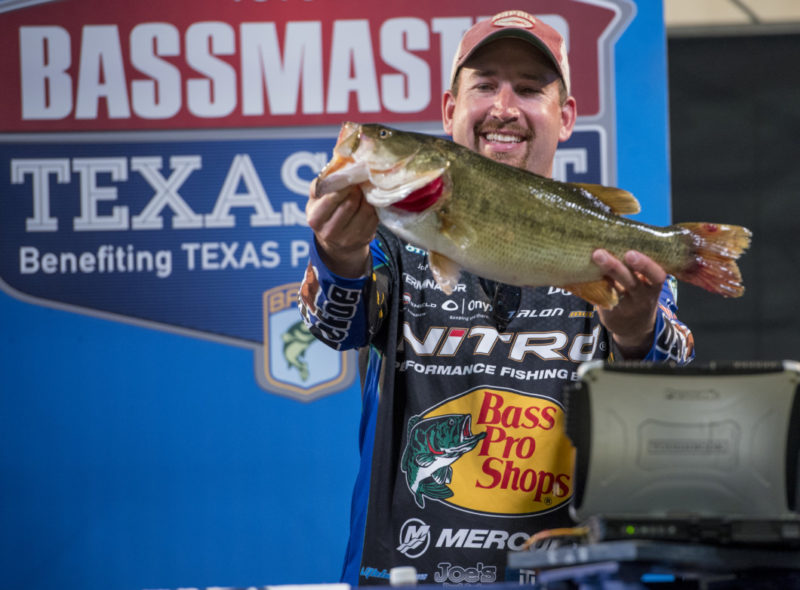 On the final morning of practice I started in the back of one of the bigger creeks where the hydrilla started and quickly caught three fish on a bladed jig, but they were only about a pound and a half each. I followed the creek channel back and found myself in the midst of hundreds of bass. Each time I’d catch one, when it jumped, I’d see four more with it. On the next cast I’d catch another. They weren’t big, but it would be a place to catch an easy 12 ½ pounds and if I got a few of the better fish to bite I might catch as much as 15 or 18.

I spent the rest of the day looking for more places with good hydrilla. Using my Humminbird 360, I was able to pinpoint and throw at the edges and it was pretty easy to get bit. My best fish was a 4 ½ pounder that ate a topwater.

On the first day of competition I headed back to the spot where I’d seen so many the day before and I missed one before I got there. Once I was lined up, I caught three that were between 1 ½ pounds and 1 ¾ pounds very quickly, but unlike the day before there were no followers with them. The wind was dirtying the water there a little and I missed one more before they quit. As I started working along the creek channel there I could see six or eight other tournament boats and everybody seemed to be catching a few. I was throwing a topwater and after a small one missed it I threw back and was greeted with a vicious strike. I landed the fish and it weighed 6-09, the biggest one I’d caught so far. I got it all on the GoPro and it was amazing.

As I fished back through the area I caught a 2 pounder to finish out my limit and then culled out my sub-2 pound fish. I got lined up again and caught a 3-06, so now I had a solid bag with the 6+, the 3+ and three fish over 2 pounds apiece. I stayed there until about 10:30 when it seemed to die and while I had a good limit, I never ran across a school like the day before. I’m still not sure why they didn’t show up again.

At 10:30, I left to just go fishing and practicing for the rest of the tournament. In one pocket I had three fish between 2 ½ and 3 ¼ pounds bite my swimbait but they didn’t hook up. With and hour left to go I went back to my starting area and shortly thereafter caught a 2 ¾ pound fish that culled up by half a pound. Then, with 20 minutes left to go I caught a 6 even on a swimbait. That was a 3 ½ pound cull and brought me up to my weight of 20-15 for the day. I was surprised that there weren’t more 23 to 25 pound bags and was very happy to be in 12th place, thanks to those two big bites.

On Day Two they put a live camera in my boat because I was high in the AOY race and because they thought I’d have cell service but it ended up that I didn’t. I started in the same area and quickly caught one about 2 ½ pounds on a worm but after that I worked all the way to the back with nothing to show for it. In the far back there was a roadbed which created a clear spot in the grass and had tons of fish swimming over it ranging from non-keepers up to about a pound and a half. I got back there and fired out a square bill, a lure that I hadn’t thrown on Day One and was surprised when it loaded up under the weight of a decent fish. Then it jumped and I was please with it, but when it went back down it got heavier and when I got it closer to the boat I saw that I had two hooked, a 3 pounder and a 2-03. Those two brought me up to three fish and then I finished out my limit, mostly with a worm. When I left, I had 12 or 13 pounds but no big ones.

Around 10:30, I just went fishing again. On my way out of the creek I stopped on a clear stretch of bank and after a few small fish I caught a 3-02 on a topwater. I may have culled once more all day, and despite catching a fair number of fish I never had a chance at a better bag. With only 13-15, I fell 21 places to 33rd. I still had another day to try to gain some of those points back.

After multiple days of consistent southeast wind, the water in my main area had gotten dirtier every day, so I decided not to start there. I was pretty sure that I could catch 12 or 13 pounds there, but that was going to cause me to drop even further. I needed 16 or 17 pounds just to hold my position, and more than that to gain some points. Therefore I started on some new water further south. Fishing the hay grass I quickly caught a couple of small keepers and then a 2 pounder on a topwater. After that I finished out my limit fishing a jig on cypress trees, but my first five might’ve weighed 7 pounds. My first cull brought me up over 8. That wasn’t going to get the job done. I tried shallow and deep cranking, as well as a jerkbait, but nothing was working. 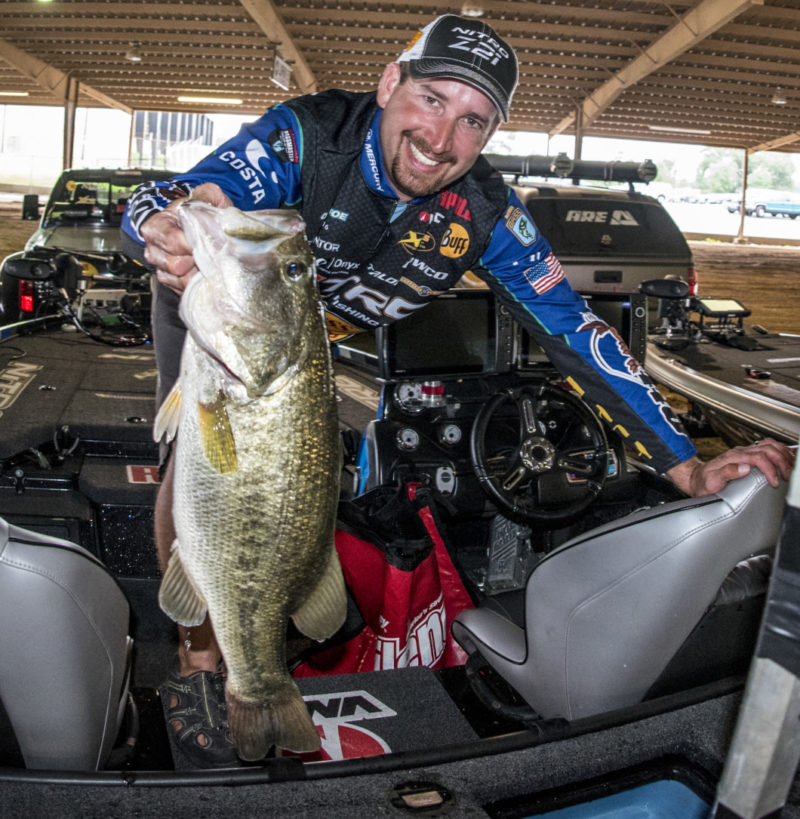 I started to think that maybe it would be an off day for many other anglers, and that by getting myself up to 13 pounds I could stay in the top 40 instead of falling all the way to 50th. I went back to the hydrilla with the worm trying to catch a few 2 ½ pounders and quickly caught one of those, providing me a one pound cull, then I left.

With less than an hour left to fish I headed to the first creek I’d fished in practice. I hadn’t been there yet during the tournament but knew that it had some potential. If the wind was calm and the sun was bright, you could see the grass clumps, but it wasn’t so I had to depend on my Humminbird 360. I quickly caught a 2 ¼ pounder, then a little one, then a 1-12 that culled again. I saw a good clump of grass on my 360, fired a cast into it and got a bite. It felt big, but they all feel big in the grass. Then it jumped and I realized that it truly was big. I lipped a 7-03, the big fish for the day. Now I was at about 16 pounds, far better than I thought I’d do a few hours earlier. I culled again, and then caught a few more that didn’t help.

That last hour was really big for me. I went from 8 or 9 pounds up to 16-09. I did drop two places to 35th, but I prevented a freefall. I was helped by the fact that I caught three big fish. Lots of guys in the top 12 didn’t catch any big ones. I just couldn’t catch as many 3 to 4 pounders. It was a good week considering that a 4 ½ pounder was the biggest fish I caught in practice.

I did most of my damage with two baits, a 10” pumpkinseed worm and a 6” swimbait rigged with a treble hook. I fished the worm on a 7’2” medium-heavy Bass Pro Shops Titanium 8 baitcasting rod paired with a Johnny Morris Platinum reel (8.3:1) spooled with 30 lb. XPS braid and a 17 lb. XPS fluorocarbon leader. I paired the worm with a ¼ ounce Swagger Tackle tungsten weight and a 3/0 VMC Heavy Duty worm hook. I fished the swimbait on a 7’ medium-heavy Johnny Morris CarbonLite rod with a CarbonLite reel (7.5:1) with 17 lb. XPS fluorocarbon. 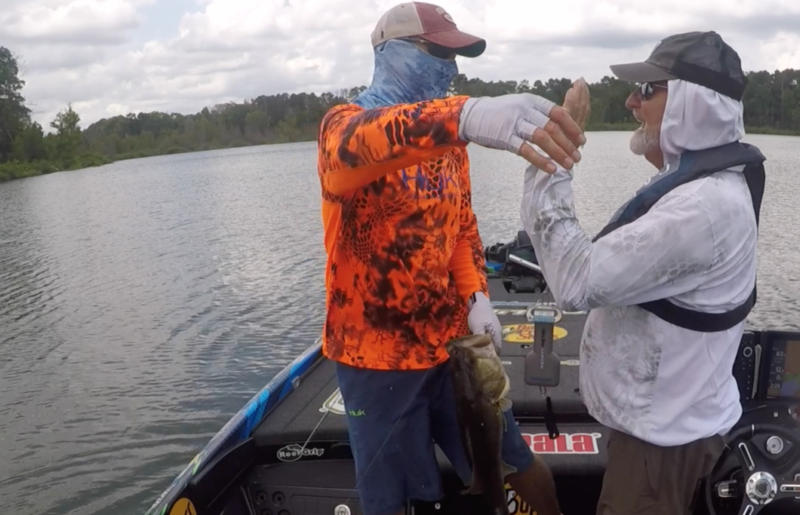 My Humminbird 360 and my Lakemaster mapping chip also played a critical role in my success. With the 360, I could pinpoint the clumps of grass and hit them every time. They recently remapped the chip and it is dead on. I could see every little corner and turn in the channels and together those two pieces of technology are deadly.

We’re now at the halfway point in the season. I’m no longer leading the AOY race, but that’s ok. Sure, I’m no longer getting a $1,000 bonus check each event, but that’s not enough cash to cover the stress. Nevertheless, at this point in time every point is huge. I need to be careful going forward to make good decisions and execute effectively if I want to end the season on top of the mountain.