Throughout multiple visits to Lake St. Clair with both BASS and FLW, the lake had always been a thorn in my side. I think in my best tournament I finished in the high 40s, and that was when the bite was really tough. The news prior to this event was that the lake was fishing really well, so it was pretty easy to make the decision to stay in St. Clair rather than run to Erie or Huron.

On the first day of practice I started in Anchor Bay. The water has been high on all of the Great Lakes this year, so I started up shallow around some islands at the mouths of the rivers and I managed a few bites early on. Unfortunately, they were just one here, one there, although some of them were in the 3 to 3 ½ pound range.

As I was running a clean shallow flat in 4 or 5 feet of water, I marked a place that dropped from 5 to 7 feet and had some submerged grass. I stopped and started fishing with a Storm spy bait and pretty quickly landed a couple of 3 pounders. I also had one almost 4 swipe at the lure close to the boat, but he didn’t get it. Within an hour I had 8 or 10 bites, and they were all decent quality, so I was convinced that I’d located an area where I could catch 15 pounds relatively easily. I fished a few more spots nearby and got several bites, but nothing was as good as that one area. 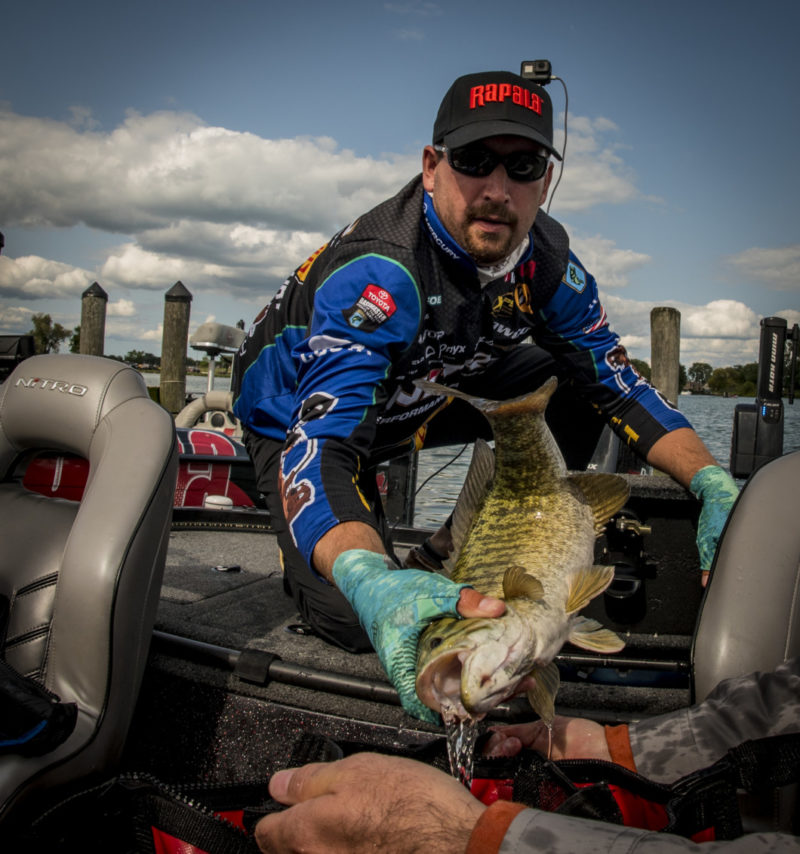 Four or five miles away I found another similar spot, but the fish there were mostly in the 1 ½ to 2 pound class. I did see a local catch a decent one there, but overall it didn’t seem to have the quality that you’d need to do well on St. Clair.

On the second day of practice the wind blew like crazy so I spent most of the day drifting around the Mile Roads with a drift sock out. I caught a 3 ½ pounder early on a crankbait and a couple more on a dropshot, but I didn’t find anything that I was crazy about. It was a hard day to fish and after 8 or 10 hours I felt that I’d accomplished as much as I could.

Against my better judgment, I spent Day Three down in the Detroit River. I caught plenty of little largemouth and also had a few decent smallmouth bites. In one spot I saw a 3 ½ pounder, then backed out off that area and caught one around the same size. The groups weren’t as big as up in Anchor Bay, but the quality was there, and between the two areas I felt like there was the potential for a decent tournament.

It was an easy choice to start the first day of the tournament in Anchor Bay. It was close and that’s where I’d had most of my bites. Unfortunately, the wind had changed, and up there that always seems to have a dramatic effect on the bass. I fished and fished and fished and never had a bite in an area where I’d caught quite a few in less than an hour during practice. As I was running down past one of my waypoints, I decided to pull just upwind of it and fish for a while. That was a good decision. As I burned my Ayu-colored BPS Speed Shad 3.8 on a ½ ounce VMC Boxer jig back to the boat, a bass around 3 ½ pounds shot out and turned away. If I’d had 10 more feet of line out I would’ve caught him. But I got my revenge a few moments later when I caught one about that same size to break the ice. When I got close to my other waypoint I added one around 2 ½ pounds.

I fished that line a little more, then ran a few miles to where I caught the smaller ones in practice and a Rapala Shadow Deep Rap produced a beautiful 3 ½ pound smallmouth. I ran up to where I’d caught the first two fish and had a good bite on a spy bait, but I didn’t hook up. At the point it was around noon and I only had three fish. I was tempted to make the run to the river when I caught my fourth fish on a spy bait. That convinced me to stay and shortly thereafter I caught my limit fish on a Ned Rig. They were all right on the waypoint.

After finishing my limit I pulled out a dropshot and caught five in a row with my Ultrex spot-locked in place. That allowed me to cull a few times. When that bite died I switched to the Shadow Rap Deep and caught 10 more and culled up to 18 pounds even, all from one spot. It had taken me until 12:30 to catch a limit, but from 1 to 2 pm I caught 15 more. At that point I could see what made this area so special. It was 7 feet deep and dark all around, with a light spot in the middle. That bottom change to sand was what held them there and brought new ones in.

I started right on my waypoint the next morning with a jerkbait and caught a 3 pounder on my first cast. It took about an hour to fill out my limit, and while it was never fast and furious I picked them off one by one. With those first five fish I had 15 pounds, and later in the day I switched to a Ned Rig and caught most of my better bass.

The key to my best lineup was to get as far away from the waypoint as I could, turn the boat away from it, put my graph on standby and hit Spot Lock. Then I’d fish off the back deck. The Ultrex is an incredible tool, but it keeps the trolling motor running and I’m always concerned about a fish getting caught in the prop. By fishing off of the back deck I was away from all of that and could still hold my spot. The area was reloading constantly, and when I have that kind of confidence in a place it enables me to fish exceptionally slowly. I’d move the bait an inch at a time, and when the fish would finally bite the strikes would be rod jarring. Once I’d culled up to 20 pounds I spent some time idling around looking for more good schools as I was convinced this couldn’t be the only biting bunch in the area.

I was pretty surprised by the Day Two weights. The top 50 cut almost always doubles from Day One to Day Two, but no matter where we go the top 12 usually falls a bit. Even though I’d caught more on Day Two and moved up from 44th to 31st, in terms of weight I was over a pound more out of the cut at that point. The fish had simply bitten better that day. 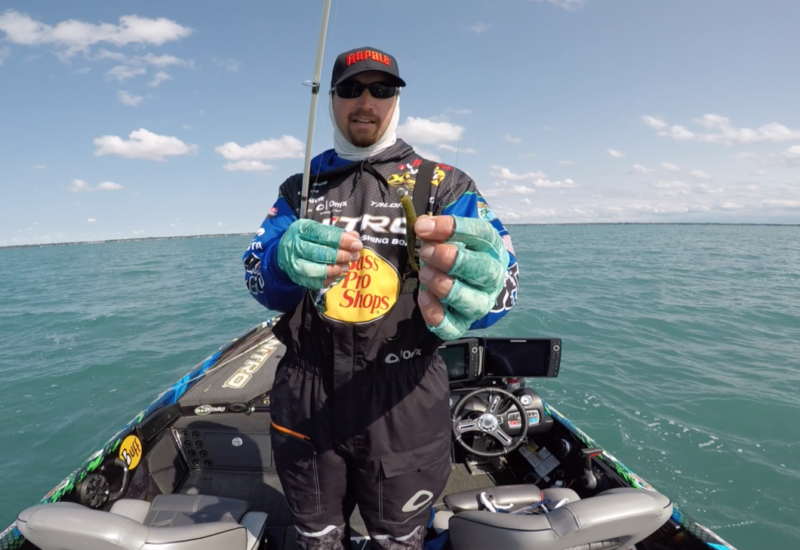 Not surprisingly, on the third day of competition I headed straight to my best spot. It was definitely slower that morning and I managed two or three fish early as I eventually made it down the line to where I’d caught one the first day. On a gut feeling I switched to a Rapala DT6 and caught one around 4 pounds about 150 yards below the sweet spot. The wind got slick at about 10am but the Ned Rig didn’t produce, so on another gut feeling I switched to a wacky rigged BPS Stik-O and on my first cast I caught another 4 pounder, which brought me up to 17 or 18 pounds.

At that point I made the decision to go up to a place that I’d graphed the day before. Neither the jerkbait nor the Ned Rig produced up there, but I’ve found that when it’s absolutely dead slick there’s nothing better for those smallmouths than the spy bait. That produced another fish over 4 pounds that allowed me to cull again. I felt really good about the fact that I caught two big ones on a place other than my sweet spot and that my instincts paid off with several key lure switched. My 20-08 moved me up another 10 spots to 21st, but I was never around those 5 pounders that I would’ve needed to make the top 12.

Overall it was a fun, fun week and it was especially rewarding to have a good event on a lake that had been my nemesis.

Obviously the Ultrex Spot Lock feature was a key to my success. Twelve of the 15 fish that I weighed in came off of a single spot while “locked” in place. That tool has been a game changer for me and for many other pros. 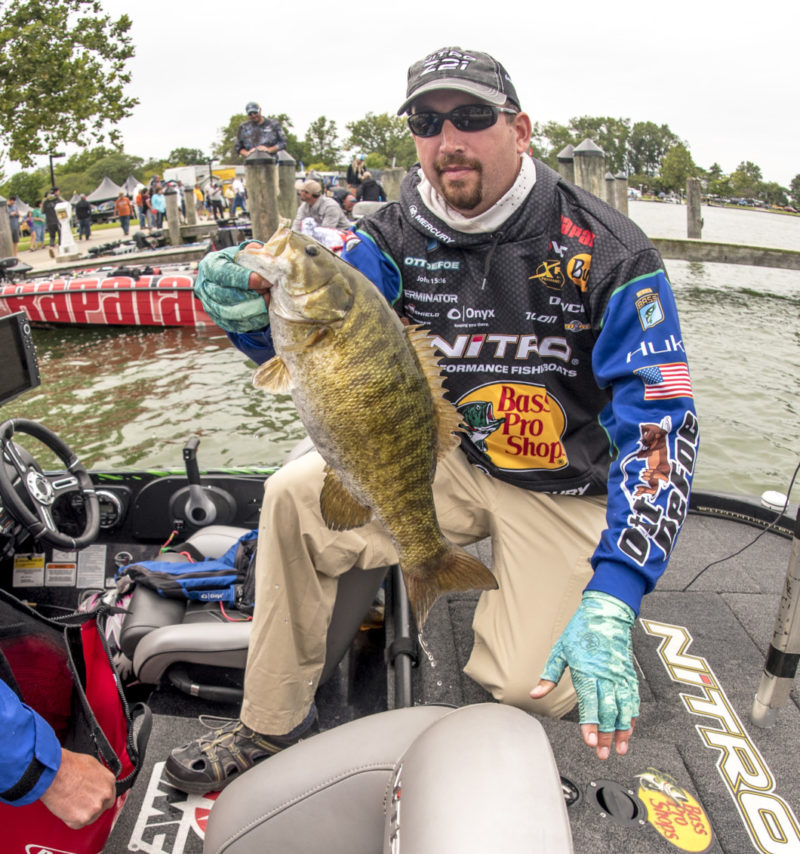 I caught fish on multiple lures, but one of my best baits was the Rapala Shadow Rap Deep in an olive green color. I took a Sharpie to it to add some stripes to make it resemble a perch even more and I fished it on a Johnny Morris Platinum 6’9” medium-action rod with a Platinum 6.8:1 gear ratio reel spooled with 10 lb. XPS fluorocarbon. The other workhorse was a Ned Rig, specifically a BPS 3 ½ inch Split Tail Stik-O in Green Pumpkin or Cally Craw with about a half inch cut off the head. I fished it slowly on a 3/16 ounce ball head jig on spinning gear – a 7’ medium action Johnny Morris CarbonLite rod with a matching spinning reel spooled with yellow  and a leader composed of 8 lb. test XPS fluorocarbon.

The next Elite Series event is on Mille Lacs, another incredible smallmouth fishery, but first I’m going to compete on Douglas, my home lake, in the final Northern Open of the season.