Prior to 2017 the Elite Series had visited the St. Lawrence River twice and my two results were very different from each other. In 2013 I kept things really simple, fishing a dropshot and a tube from start to finish, and I made it to Sunday and ended up in 3rd place. When we returned in 2015, I tried to do too much and it proved to be a disaster. I finished 78th. I kept that in mind as I headed into practice for this event.

The last time we fished the St. Lawrence I was surprised by the role that the largemouth bite played in the tournament. Smallmouths produced the win, but overall the smallmouth fishing was off and the largemouth fishing was better than expected. I love northern largemouth fishing because if you find one you usually find a group of them. I knew that smallmouths would be the main deal, but I intended to spend some time on green fish, too. That meant it made sense to spend most of my practice down near Clayton. It’s a more diverse area than the water around Waddington and it’s possible to bounce back and forth from largemouths to smallmouths without wasting a lot of time.

Overall my practice was not very good. I found a few places where the largemouths were biting, but I think I may have only had one fish in the 3 pound class. Quality smallmouths proved equally elusive, and I never caught any over 3 ½ pounds.

Heading out on the first day I felt that my best chance to do well in the tournament involved starting on largemouths and catching what I could. Even though I hadn’t caught many good ones in practice, I’d seen some 3 to 3 ½ pounders swimming and if everything went well it had the potential for 16 or 18 pounds. I headed to a shoal that was unique in my experience – it had exclusively largemouths on one side and exclusively smallmouths on the other. There were lots of 2 to 2 ½ pound fish, along with a few 3 pounders.

I had a limit pretty quickly on a Bass Pro Shops Speed Shad. When I’d reel one in, several others would typically follow. I’d let them reset, and then catch one or two more. I ended up with perhaps a dozen keepers from that area, with the biggest just over 3 pounds, and in 90 minutes I had over 13 pounds.

From there I headed to another largemouth place and when I got my first bite in a mat I jerked the fish up through it. It came up, rolled, and I could see that it was about 3 ½ pounds but even though I felt I’d hooked it well it came off. After that I caught two or three more that were right at the 3 pound mark.

I worked my way down toward Clayton and when I arrived I caught another largemouth just over 3 pounds to cull again. Then I added a 3 ¼ pounder on a Speed Shad 3.8 to improve my bag once again. I was drifting in 3 feet of water when I saw a big dark smallmouth that I was about to run over. I didn’t want to hit the trolling motor and spook him, so I just kept drifting and he sat where he was and came out the other side of the boat. I pitched my swimbait at him, he nosed down and thumped it. I set the hook and missed. I pitched right back, he hit it again and I missed again. I pitched a jig but he wouldn’t touch it, so I went back with a smaller Speed Shad and this time I hooked up and put the 4 pounder in the boat.

That brought my bag up to 16-12, and I was pretty proud of it because I felt like I’d maximized the potential of what I’d found in practice. That’s why it was so concerning when I got back to weigh-in and found out that nearly everyone else had smashed them and I was stuck in 60th place. I had thought that the fishing was not nearly as good as when we’d been there in 2013, but the weights this time were considerably better, and it took 18 pounds to be inside the money cut.

I knew that I’d have to regroup on Day Two and have at least 18 pounds to have a shot at the cut. That gave me the freedom to try something totally different, and I headed to a section of the river downstream from the ramp that I’d never really fished before. I went blind and unfortunately I never really got on anything. At times it felt like I wasn’t even sure that there was a bass living in the vicinity. I spent most of my time up shallow trying to force that bite and in hindsight it’s clear that I should’ve drifted out deeper. Eventually I headed to a shoal that I’d found on Google Earth and caught a smallmouth that was just under 4 pounds and a largemouth that was about 2 ½ to put something in the livewell. As I headed back to the ramp I added another smallmouth that was about 3 ½ pounds to salvage a few points, but to weigh in only three bass on a fishery as fertile as the St. Lawrence is very humbling. It’s the kind of place where as you go through boat check you feel like you already have 15 pounds in the livewell, so weighing in anything less than a limit, and falling to 99th place, was a hard pill to swallow.

My best lure in this event was a Bass Pro Shops Speed Shad swimbait, both the 3 and 3.8 inch sizes in “K’s Magic,” a color that features a green body and a lighter belly. I fished the 3 incher on a ¼ ounce VMC Moon Eye Jig, using spinning tackle – a 7’ BPS CarbonLite rod with a size 30 CarbonLite reel spooled with 10 lb. XPS Hyper Braid and a leader of 8 lb. XPS fluorocarbon. I threw the 3.8 on baitcasting tackle – a 7’ medium-heavy CarbonLite rod with a 7.5:1 CarbonLite reel spooled with 14 lb. XPS fluorocarbon. 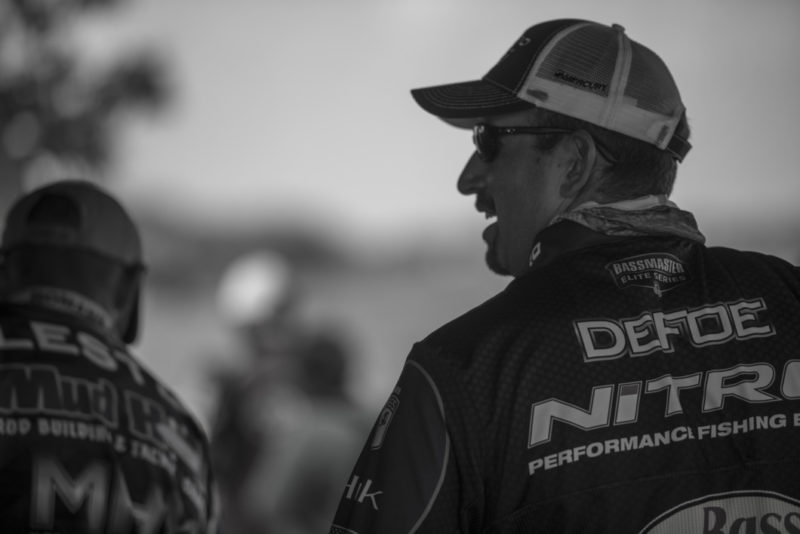 The other tools that played a critical role in my success this week were my Nitro boat and my Mercury outboard. On the morning of Day One I reset the trip counter on my Humminbird Helix and when the day was over I’d run 150 miles round trip without refueling, burning a total of 52 gallons of gas. Sure, I’d run at only 58 miles an hour part of the way to conserve fuel, but that type of efficiency and reliability is unheard of with any other combination of equipment.

This rough finish dropped me out of the lead in the AOY race, but believe it or not that relaxed me heading into Champlain. There’s a lot of fishing left to go in this season, mostly on venues where I’ve had some success, and I intend to give it everything I’ve got to end up in the best possible position.