The Elite Series has visited the St. Lawrence River three times prior to this season, and after starting off strong with a 3rd place finish in 2013, I struggled the next two times, ending up a disappointing 78th and 99th.

One of the main reasons for my two stumbles was that the last two times out I divided my time equally between largemouths and smallmouths, whereas the first time around I fished exclusively for smallmouths. After a high water year in 2017, I knew that water levels throughout the Great Lakes were much lower this year, which I expected to make the smallmouth even stronger. Heading in I was 100 percent committed to chasing smallmouths, and I intended to do it in an 8-mile stretch where I’d done well in 2013. That might not sound like a lot of water, but that section is 2 miles wide in places, and it’s fishable from shoreline to shoreline so it was plenty to cover in three days of practice. 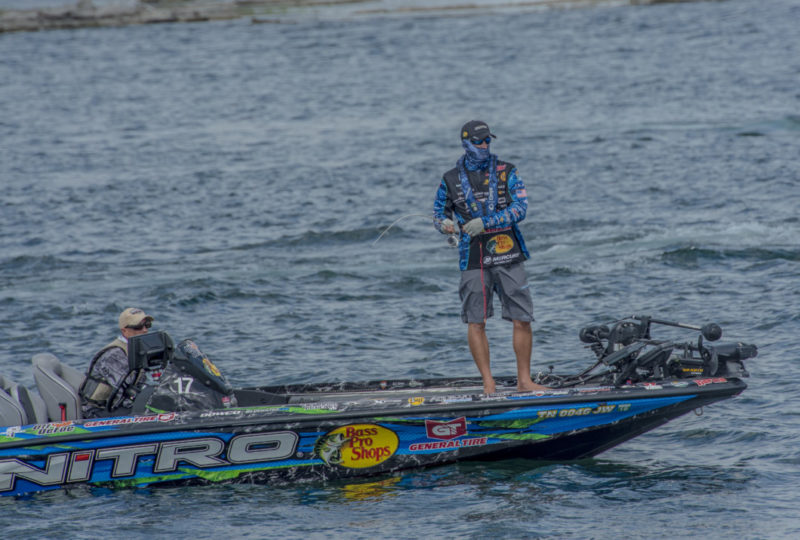 I launched there under sunny, windless conditions on the first day of practice and although there were quite a few other competitors in the area it didn’t take long to dial things in. I figured that the fish would be in 20 to 40 feet of water and that proved to be right on the mark. Almost right off the bat I caught a big one that I figured was a bit over 5 pounds but when I put it on the scale it showed 6.15. That was an eye-opener. The fish weren’t necessarily bigger, but they were going to weigh heavier. They had several months to feed heavily, and the results were evident. Later in the day I caught one around 5 ¼ and while I didn’t catch many over 4 pounds, I landed enough heavy threes to know that we were going to see some massive catches.

Day Two of practice dawned slightly cloudier, but there was still no wind, and once again the fishing was excellent. I caught a couple close to 5 pounds and several in the 3 ½ pound range. It wasn’t quite as good as the prior day, when I would’ve had nearly 23 pounds, but I wasn’t too far off that pace.

Unlike the first two days, the third day of practice was cloudy and windy and the fishing was really bad. In fact, I’m not sure that I even caught a fish over 3 pounds. I wasn’t too fearful, though, because the weather was expected to go back to being calm and sunny, at least for the first day of the tournament. I’d also managed to dial in my bait choices. While I’d thrown a spy bait maybe 10 casts and a crankbait perhaps three times that many, the rest of my presentations utilized a dropshot. I might’ve tied up four or five rods that night, but I really wanted to rely exclusively on the dropshot. Of all those choices, it’s the one that presents the best chance of landing those hard-pulling smallmouths.

I was boat number four on the first day of competition and therefore was one of the first boats to get to my area, although quite a few piled in quickly. That morning bite was key and I took advantage of it, catching a 4, a 3, a 5, another over 3 and a 4 ½ by 8:30 am. That gave me 18 pounds, which I figured would get me into the money cut. Then the bite slowed down, until around 10am when I culled twice with a 4 ½ and another 4, which combined put me over 20 pounds. By the end of the day I was culling out 3 ¾ pound fish, and when I got rid of them last one of them, I didn’t quit, but I retreated from my good water to places I hadn’t fished during practice. I had over 23 pounds in the livewell and figured that would put me in the top 10, so I couldn’t any big bites I couldn’t use. 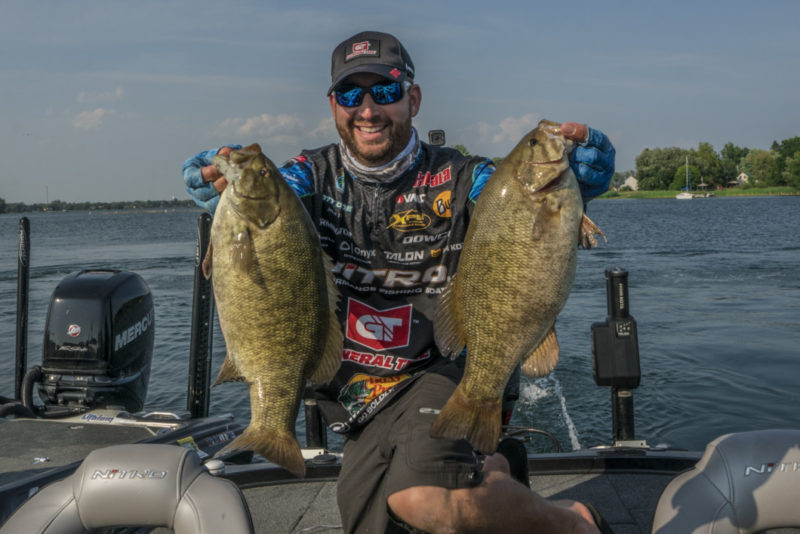 My best five weighed 23-02, and after a dead fish penalty my 22-14 had me in 22nd place, just over a pound out of the top 12. Needless to say, I was shocked at the weights, but I really couldn’t complain. I’d fished well, landing 100 percent of the fish I’d hooked, and I felt that there were still more on my best spots.

That meant there was no reason to change things up on Day Two. I headed straight for the high spot that had produced several of my best bites and caught a 4 ½ pounder right off the bat. Then things slowed down and I missed a few before adding another 4 ¼ to my livewell. If there was any theme to the week, as experienced by both myself and other anglers, it was that the good bites tended to come early, and then things would slow down. It took my until about 10:30 to finish out my limit.

The fish just didn’t bite as well that second day. I managed to land about 12 to 15 keepers, but I also lost five or six, including a bass over 5 pounds. I’m not sure if it was the fishing pressure or the weather, but they didn’t eat the bait nearly as well. I had an opportunity to put another 23 pounds on the scale, but I ended up with “only” 21-07. Fortunately, lots of others found the bite to be tricky as well, and I climbed seven places to 15th.

The second day had been windy, and it was forecasted to persist into Day Three, but when we launched it was slick out and I figured that the bite would be back on. We’d had up to 30 boats in my best area on Day Two, and they’d beaten up some of the key places, but I knew some other places that I hadn’t leaned on yet. Also, this was my first tournament with the new Mercury four-stroke on the back of my Nitro. I didn’t notice how fast it was on the first two days, but on Day Three I was boat number 15 and I passed seven or eight others on the first run of the morning to claim what I felt was a good stretch.

Another key adjustment that I made was to use my Aqua-Vu Camera, something I’d never done during actual competition before. Those fish on the St. Lawrence sit so tight to the rocks, that even with my space-age Humminbird graphs I couldn’t always pick them out. The camera leaves nothing to doubt, though, so I brought it along to make sure that the fish were still in the area. It was immediately evident that they hadn’t left.  Here’s a video on how I had my camera set up.

Nevertheless, after a couple of drifts on a good stretch I hadn’t caught any fish, so I moved and dropped the camera in a different place. I could see the fish clear as day, but they still wouldn’t bite my cricket. I was holding it in place with my bare toes as I fished, and what I saw gave me the confidence to stay. Shortly thereafter I caught one over 4 pounds and another one almost three. I continued to see fish, but it was tough to make them eat. That’s the good and bad about using the camera – when they’re biting, it makes it easy, but when they’re not biting it makes it frustrating. While the camera helps you locate them, with the current flowing fast it’s tough to target the fish precisely. You need the right drift, at the right angle, at the right speed to get a bite, and it quickly becomes obvious if you miss on one or more elements.

The bite remained tough and I landed my third keeper before losing what would’ve been my biggest fish of the week. It went straight under the boat with her head shaking and finally pulled off. When I left that primary area, I had one around 2 ½, one a little bit under 3, and one around 4 pounds. I managed to catch around six or eight more keepers in the 1 ½ to 2-pound class, but I was afraid that one would die and I’d be stuck with it, so I kept throwing them back. At around 1pm I finally put a 1 ½ pound fish in the livewell as my fifth. I figured it would surely last a couple of hours and ideally I’d cull it out.

At that point I moved closer to Ogdensburg and quickly landed 2 ½ and 3 ¼ pound fish to cull up a bit, but only to 15-11. It was definitely the toughest day, and even if I’d executed perfectly I still don’t think I’d have had over 20 pounds. Because the weights are always so good and so tightly-packed, it’s an easy place to fall out of the running and a hard place to recover from a bad day. I dropped 16 places to 31st overall, much better than my last two tries, but not the top 12 I desired (or even the 13th that has become my standard resting place this year). If I had it to do over again I’d spend more time during practice using my camera and not fishing. The goal is to find groups of fish, and even if they’re not biting when you first find them, at some point in the day there’s going to be a window and by bouncing around from group to group you can get healthy in a hurry.

I spent the whole tournament with a dropshot in my hand. It made it so simple not to mess with anything else. Most of the time I had just two rods on the deck, although sometimes I added a third, mostly for decoration. Both set-ups were identical with Bass Pro Shops CarbonLite 7’2” medium-light spinning rods with matching CarbonLite reels. I spooled them up with 10-pound test Bass Pro Hyper Braid and an 8-pound test XPS Fluorocarbon leaders. My key bait was a Bass Pro McCreature, a goby-looking lure with a flat tail, usually in the color called Magic. I used a #6 VMC Neko hook and a 5/8-ounce dropshot weight.

In addition to the Aqua-Vu, the other technological advantage was the fact that my Ultrex and Humminbird units are linked together. I could hit “go to” and “Spot Lock” from the console and while I culled or put fin clips on my fish it would get me within 50 yards of where I’d gotten the bite rather than 150 yards. That saved me time.

After this finish I’m in 4th in the AOY race with one tournament left to go. I can’t win the title, and I can’t rise above 3rd, but each spot I gain or lose will cost me substantial money. Since I figured there was a chance I’d be fishing for something major, possibly the AOY, I prefished the lake before it went off limits, and I’m pretty sure it’s going to be a tough event. Fishing in this part of the country in September is normally pretty stingy, so I’m glad I put in that extra effort to dial things in.