By now the Elite Series has visited Toledo Bend several times and my results have been all over the map. Last year I finished 14th, my best result there so far, and I wanted to keep that momentum going. Even though recent tournament results had shown that the lake was in a mini-slump, I still knew that I’d need to catch big bags to have a shot.

Once again, my practice was not good. That’s been a recurring theme this year. I expected there to be a good shad spawn, but I never found it. There were still a few spawning and I managed to catch some fish with the new Cover Pop and a wacky worm. I felt like if I found a spot where I could catch a few early, I could poke around with the wacky worm the rest of the day and hopefully run across one or two good ones on beds.

There’s a spot near the takeoff where I’ve caught some fish in the past, but I didn’t practice on it this time. Nevertheless, with an early boat number and not much else to go on, I went straight there the first morning of the tournament. It paid off quickly with a 2 ½ pounder on a buzzbait on my third cast. A few casts later, I caught another keeper, and then missed a few. I ended up with four fish in the box before the last flight had blasted off. Then I moved to the next point and quickly caught a 4 pounder and a 2 ½.

I had six keepers in an hour on water where I hadn’t practiced and the best five totaled about 15 pounds. That wasn’t enough to put me near the top, but it was a solid start and gave me the confidence and the cushion to keep on searching. I put the Cover Pop, a wacky worm and a jig on the deck and just went fishing, hitting whatever I came to, but nothing I had practiced on.

In one little pocket I caught a good one on the Cover Pop and then I culled again with a 3 ½ pounder that ate my ½ ounce Terminator jig next to a cypress tree. After that I managed a few more fish but none of them culled. My 17-07 had me in 18th place, less than a pound out of the twelve cut. I was blessed to make a very good first stop and it turned out to be a solid day considering how little I had caught in practice.

On Day Two I was in the last flight, but I was able to start on my spot again. Unfortunately, the shad spawn had ended very quickly that day. I still don’t understand why they do what they do. Some mornings, even if the conditions seem right, the shad just don’t fire up and that was one of those days.

Once it got past the time when I knew that the shad spawn was definitely over, I moved to one little point where I’d caught a few pound and a half to two pound spotted bass in practice on a jerkbait. Pretty quickly a couple knocked it real hard but didn’t hook up. I switched to a shakey head and caught two little bitty keepers. Then I moved into a pocket and caught a 14 ½” largemouth. I had three keepers for not even 3 pounds.

Moving to some docks, my first or second cast with the Cover Pop was rewarded with a 3 ½ pound fish, which more than doubled my previous weight. That told me that I needed to keep the topwater in my hand. In Texas, all of the locals throw a wacky worm, so by focusing primarily on the topwater I could show the bass something different. I was focusing on the very backs of flatter pockets, looking for stumps and dark spots out off the bank. I caught several more fish, but except for one 2 ½ pounder, most were just keepers.

Overall it was a tough day – slick conditions and no shad spawn and I feared that my 10-06 might drop me out of the cut, but ultimately it left me in 41st place, really just a good bite or two out of the top twelve. That positioning gave me the freedom to take some chances on Day Three. The worst I could fall was 10 spots, and if my gamble paid off I could make up some ground. In five Elite Series tournaments at Toledo Bend I’d never made a cast north of the Pendleton Bridge, despite the fact that two-thirds of the lake is north of the bridge, because usually tournaments are won in the south. 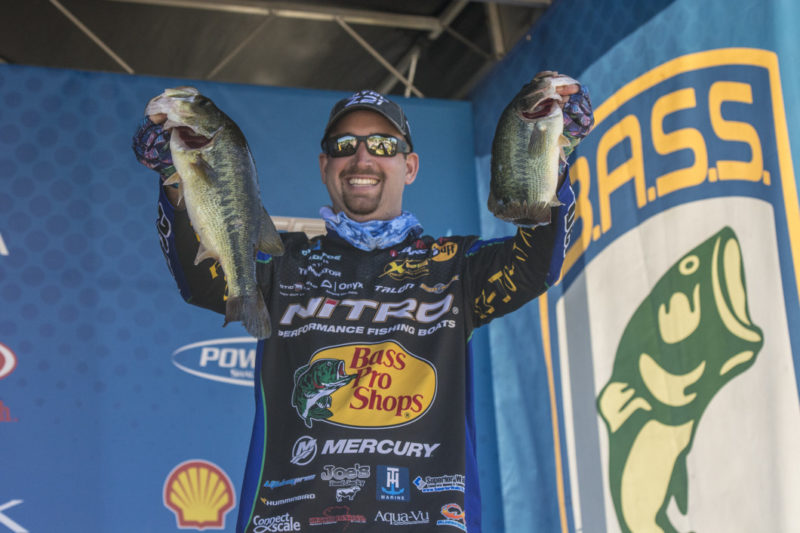 I typically spend one day of practice up north, but I’d never fished it in the tournament. With very little to lose, I made the decision to commit to a whole tournament day up north. The decision was so liberating that I elected to fish a part of the lake I’d never seen. I got on Google Earth, picked it out, and when I rode up there I caught a keeper on my fifth cast. The water was off-colored, but not muddy, and there was a thick shad spawn. I had a limit in an hour, and they were better than the average size down lake. Most of them were 2 to 2 ½ pound and I had one that was at least 3 ½ by swimming a white ½ ounce Terminator Pro’s Jig. I would swim it around anything that the shad were relating to – docks, rocks, sea walls – and they’d bite. At 11 o’clock the shad finally slowed down and I moved to some more stuff that looked good but only managed a few small fish.  For video from the day click here.

In the morning my bite had been on the main lake, but against my better judgment I moved into a pocket in the afternoon and on my second cast caught a 3 ½ pounder that culled. I landed a few small ones before culling up again to my final weight of 15-13. My decision had been a good one, as it moved me up 15 places to 26th. While I was disappointed that my streak of top twelves was halted, overall I feel blessed with the way the week progressed. 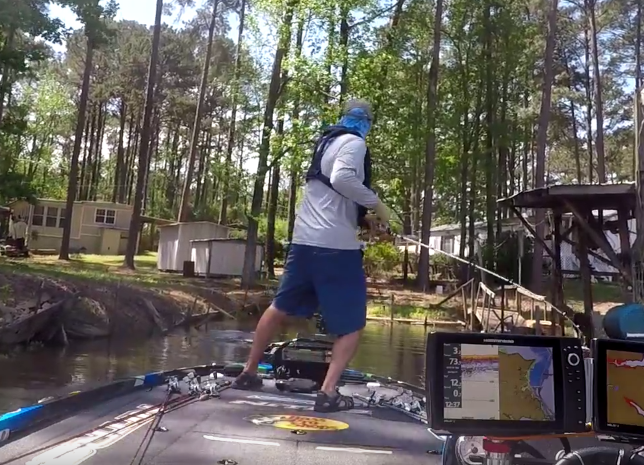 One of my main tools this week was a white 3/8 ounce buzzbait fished on a 7’ medium-heavy Bass Pro Shops CarbonLite rod paired with a 7.5:1 CarbonLite 2.0 reel spooled with 17 lb. XPS fluorocarbon. The other topwater, the one that has me really excited these days, was the Storm Cover Pop, which will be released at ICAST. I fished that on a 6’6” medium action CarbonLite rod paired with a Johnny Morris Platinum (6.8:1) spooled with 17 lb. Excel monofilament. A third key lure was the ½ ounce white Terminator Pro’s Jig with a Bass Pro Shops Swim-N-Elite Chunk for a trailer. I fished that one on a BPS Titanium 8 rod (7’4” medium-heavy) with an 8.3:1 Johnny Morris Platinum reel spooled with 20 lb. XPS Fluorocarbon.

My Nitro Z21 and also played a key role in my success this week, particularly with respect to my final day gamble. I’d never gone that far up there before, and I knew that I could depend on my boat and motor to get me back. My Humminbird Lakemaster chip guided the way – it’s been improved substantially since last year, with incredible accuracy on the boat trails, and if you use one there’s no way to get lost.

I held on to my lead in the AOY race, and while there’s a lot of fishing left to go this year, with each event that passes I’m one step closer. Gaining those 15 points on Saturday may prove to be critical over the long haul. Next up is Ross Barnett. I’ve never been there before and all that I’ve heard is that it’s a mud hole and it’s not big. I’m excited for it, though. This has been a great year so far and I want to keep fishing instinctively, taking each event as it comes.