When we visited Wheeler in 2011 I finished 5th, and I felt like I had the bites to win. I’ve always felt that it was the worst lake on the Tennessee River, but the one that I like the best, if that makes any sense. I’ve been there a number of times over the years but mostly in the summer and fall. The only time I’d fished a tournament in the spring was a BFL many years ago, so I headed into the tournament with an open mind, hoping to give it a fresh look.

I knew that the smallmouth fishing had improved over the years, so the first day I made the decision to go down lake to search out that bite. Unfortunately, I didn’t go far enough down. I fished some bluffs and didn’t catch much the whole day, and the ones I caught were pretty small, so later in the day I moved up to the famous Decatur Flats to target areas where I’d done well before. Once again, I got relatively few bites and they were small. It wasn’t the area of the lake that I prefer to fish, so I eliminated that section with ease. There would be no reason to turn left out of the boat ramp on any of the remaining days.

On the second practice day I launched at a ramp up the lake and immediately started to get bites, including one that was 5 pounds. I felt that I could catch even more, but there was no reason to beat them up. I checked another area that had produced in the past and had even more bites, plus I saw some fish cruising and bedding. I didn’t think it was a place where you could catch 15 to 18 pounds a day for multiple days, it they had the potential to get me to the cut days. The quality was good. With that accomplished, I loaded up early and headed to another area, which proved to be fruitless.

The third day of practice was unimpressive. I had a total of two bites, and they were both in the three pound class. I checked some main lake spots and river ledges in case the summertime patterns were in play, but the fish weren’t quite there yet. I caught one fish offshore, another shallow, and saw some more up shallow. That made the tournament day decision easy – I was going to go to the places I’d done well on the second day of practice.

I didn’t think I’d have my best area to myself, but I wasn’t sure how many other boats would join me there. One boat ran up all the way with me and turned in. We found two already there and a few more joined us shortly thereafter. It was a fairly small area but it fished bigger than I expected it would.

The bass started biting right away. I caught two on a swim jig and one on a swimbait and that settled me down. I figured that 12 pounds would be above average and 14 pounds would be pretty good, and that was attainable. After I finished out my limit and culled a few times, I still hadn’t had a good bite. The best fish I’d caught was about 3 pounds and I snatched it off of a bed that I didn’t see. There were two 5 to 6 pounders paired up on a bed, and that caused me to stay longer than I planned, but they had no interest in anything I threw, despite my best efforts. Even the smaller fish were tricky. There was one that I probably set the hook on two dozen times before I finally caught it. I left that area at noon with about 12 ½ pounds and went to an area I wanted to save. I only culled once there, which was discouraging, but at the same time I knew there were more fish there and I hadn’t beat them up. 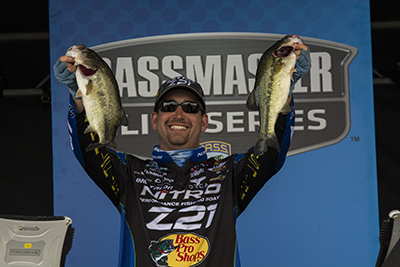 I figured that my 12 pound 14 ounce limit would have me in about 30th place, but there were far more 15 pound bags than I’d expected. I also knew that at just about any time of year for some reason it’s hard to duplicate a big bag on Wheeler, so I expected that some of the leaderboard would flip flop.

On Day Two I started in an area I’d fished before, but hadn’t practiced in this week. In three hours I had a total of two bites – I caught one small keeper and missed another small fish. That was a clue that I needed to go back to the area where I’d fished some on the first day and commit to it. I stopped and caught a few small keepers on the way. Once I arrived, I caught my fourth fish, a solid 2-pounder, on a Terminator Pro Series Jig, and then caught my 2 ½ pound limit fish on a prototype Storm popper. A little later I culled with one over 3 pounds on a wacky worm.

There was one fish on a bed that I figured was about 1 ½ to 2 pounds and would cull my smallest fish. I managed to get him to bite shortly after catching those better fish and I guess I was too excited. He started running at me and when he turned I pulled too hard and broke the line. I sat down and retied and then fired a cast 10 feet from the bed. I quickly got a bluegill peck and then what felt like a bass bite, so I set the hook. The fish was barely fighting and I saw the worm fly out of its mouth. When I caught him, he still had my other hook in his jaw. I weighed him on my Connect Scale and

he was 1.67 pounds, which culled my smallest fish.

I fished my way up the creek, past a monstrous tree that my Marshal commented “must’ve been around during the Civil War.” I flipped my jig past it and caught a 3 pounder, which culled out my last 1 ½ pounder. I saw a place that I had missed, pitched my jig over a root, popped it once and caught a 3 pounder. That got rid of the 1.67 pounder I’d worked so hard to catch earlier and gave me 14-02 for the day. As I’d predicted, the weights were down and I moved up 18 spots to 30th. While I’d pressured my best area, I felt like there were still some fish left there.

On Day Three I started in another new area where I’d gotten a few bites in practice. On the way out I caught three fish – on an Arashi topwater, a buzzbait and a jig – but they totaled about 3 ½ pounds. The obvious decision seemed to be to head back to my best area from Day One. I quickly broke a good fish off on the hook set, which angered me. I’d botched my only decent bite. I must’ve had a nick in my line. That was it for that spot.

With the clock ticking I went back to the pocket from Day Two where I’d broken off the fish and caught a 3 pounder. Very quickly I got a bite and after I swung him into the boat, not only did he look familiar but I saw that he had a cull tag hole. I told my Marshal he was going to weigh 1.67 pounds and of course I was right because it was the fish from the day before. I’d broken him off, caught him, released him 200 yards away, and then caught him again. This time he got a ride back to the weigh-in.

As the day progressed I found a few bedding fish, but the best one was only about 2 ¼ pounds. I culled once at the end, but it was only enough to get me to 9-01, which dropped me six places to 36th overall. I really thought that I would drop more, but the weights fell off. I was thankful for that, but also disappointed because I knew that with a good bag it would’ve been easy to move up 15 spots.

I had two key baits in this event: The first was a Terminator Pro Series Jig, green pumpkin with blue flake, paired with a matching chunk. I fished it on a Fenwick World Class 7’6” medium heavy baitcasting rod paired with a Pflueger Patriarch (7.9:1) spooled with 17 lb. Trilene 100% Fluorocarbon. The second was a prototype Storm Popper which should be released later this year. What I like about this lure in the spawn to post-spawn period is that it stays in place extremely well, aggravating the fish to strike. I threw it on a Fenwick Elite Tech 6’6” medium action rod with a Pflueger Supreme XT (7.1:1) spooled with 17 lb. test Trilene XL monofilament.

After digging a hole for myself early in the year, consecutive finishes in the 30s helped me get back in a better position in the Angler of the Year race. We’re almost halfway through the Elite Series season and I hope I’ve turned a corner. I can’t afford any more bad finishes and I’m happy with the way I’m fishing.