I was excited to compete in a tournament on the Winyah Bay system, a place that few anglers on the Elite Series had ever fished before. It was a blank slate, but it also presented what seemed like endless miles of water, so for the first time since my rookie year on the Elites I decided to visit the fishery before the cut-off to learn my way around.

The result of that scouting trip was that I basically decided not to practice at all in the Cooper River. Based on the information that I had, I knew that some competitors would do well up there, and I didn’t completely rule out going there blind, but I was going to spend the three official days elsewhere. 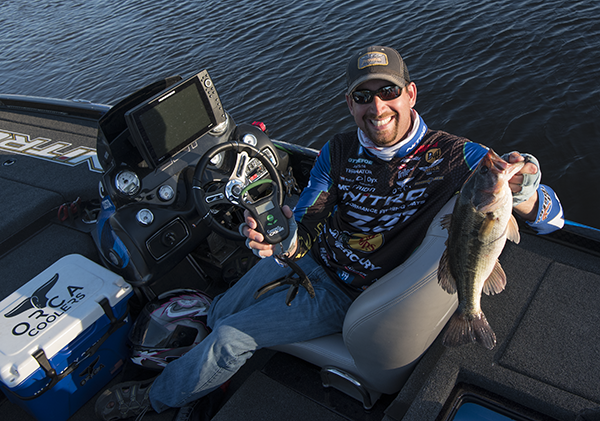 On the first day of practice I launched in the Black River, near where we were staying. It was very pretty water, but in three or four hours of fishing I never had a bite of any kind. I don’t know if that’s because the tide was high, or if it’s just an infertile area, but I wrote it off, put the boat back on the trailer and went to Georgetown to fish the Waccamaw and Pee Dee Rivers. Once I relaunched the boat, I started getting keeper bites pretty quickly, and as the tide dropped the bites became more frequent and the fish got a little bigger. I narrowed down my presentations to two baits: a short leader dropshot rig with a Berkley Shaky Snake on the hook; and a Floating Original Rapala. The Rapala was definitely better on low tide and after catching a few bass in the 2 ½ to 3 pound class I bent my hooks over so that I wouldn’t burn anymore bites. After fishing there for five or six hours I’d had roughly a dozen keeper bites. I felt pretty good about the area’s potential, figuring that I could catch an 8-10 pound limit for sure and that there was the potential for up to 12 pounds.

The next day I launched in the Santee River and went a long way upstream. After about an hour and a half I fished one little ditch mouth and caught three bass pretty fast. All of them were in the 2 to 2 ½ pound range. After that, I fished five more hours and had a grand total of two other bites. I had that one little spot, but with nothing to go with it and knowing that it was about an hour ride from the take-off, I didn’t feel like it was worth the run.

As I worked my way back out toward where I caught those three fish, I caught a couple more, including a 4 pounder, but it was just one here, one there. Even that big fish didn’t convince me that it was a safe bet. I could run up there and catch 12 to 15 pounds, but I was just as likely to blank. It seemed like a place where I could try to make up ground if I fell behind.

On the final day of practice I went way up the Waccamaw to where I felt the tide would be the best and I got some bites, but they were a mixed bag – one small keeper, one short bass, and a few pickerel and warmouth. After a few hours I ran back downstream where the tide was high and caught a few keepers. That gave me the confidence that the area held fish and that they could be caught at varying tidal stages.

The first day of competition started with a delay of over an hour due to bad weather. Due to the new moon, we had an extremely high tide, so I made the decision to hit the residential canals of the lower Waccamaw, figuring they would be least affected by the high water. I knew that there’d be other boats in there with me, but I thought that if I could scratch out two to five fish before the water started dropping that would put me in good position to upgrade the rest of the day.

Within the first 30 minutes of fishing, I had a decent keeper come up on my Floating Rapala and totally miss it. Then my day got worse. I got a hook stuck in the meat at the base of my thumbnail. It hurt worse than just about anything I’ve ever experienced and I nearly passed out. Fortunately, I was able to sit down, put some ice on it and drink some water without either passing out or leaving the water. It didn’t seem to improve the fishing, though. At 11 o’clock I got my second bite, a fish that swiped at a popper, pulled on the feathers and never got hooked. A short time later I had another bump on a crankbait at the mouth of a canal, but that one missed, too.

The tide started to fall at around 11am and I left the area around noon to run to a creek where I’d caught a few fish during practice around some of the gates leading out of the rice fields. I had two really good bites on the dropshot, but I missed both of them. It was particularly frustrating because there were teeth marks on the head of the worm both times. Later I had two more little bumps and that was it. I never hooked a fish all day – not a bass, not a mudfish, not anything. It’s the first time that’s happened to me in B.A.S.S. competition and I hated it. I played it safe and instead of coming back with a small limit I ended up empty-handed, but I wasn’t alone.

My lack of success on Day One made my decision for Day Two an easy one – I had to go somewhere where I could make up a bunch of ground. I wasn’t going to go to the Cooper River blind, but I felt that I could go to the Santee and catch enough to make the cut. Within five minutes of arriving, I caught a 2 ¼ pounder, and then in the next 30 or 40 minutes I caught two more keepers, all on a buzzbait. My fourth fish came on a shakey head and then the wind picked up. That told me to start throwing a spinnerbait and I quickly caught my fifth fish, as well as a few more. Unfortunately, one good bite – at least a 4 pounder – hit it at the boat, got the line around the trolling motor and came off. Even if it had weighed 5 pounds it wouldn’t have been enough to put me inside the cut, but it would’ve earned me some valuable points. Toward the end of the day I eased the pain a little bit by catching one about 3 ½ pounds on the spinnerbait. Overall my change was a good call and it definitely felt good to catch a few.

While my fishing wasn’t exceptional in this event, I learned one new equipment edge that I think is going to pay off down the road. In recent years I’ve run a 3-blade Mercury Fury prop but now I have a prototype 4-blade, and I switched to that in order to run the winding creeks of the Winyah Bay system. It has incredible acceleration, picking up speed quickly coming out of the corners. As I made the long run, there were other boats that were as fast or faster in the straight sections, but I definitely made up ground in the twisty areas. I plan to keep it on for the next event in Arkansas because Bull Shoals has a lot of twists and turns.

This tournament will have a unique format, with the field alternating lakes each day. Bull Shoals has been pretty good me in the past, but I’ve never been on Norfork. If it’s at all similar, I expect it to be a very good tournament. I’ve dug myself a bit of a hole this year, just like I did last year, but there’s a lot of fishing left to go at several fisheries that I really like. I hate that I have to make a comeback, but at the same time I’m excited about turning things around.